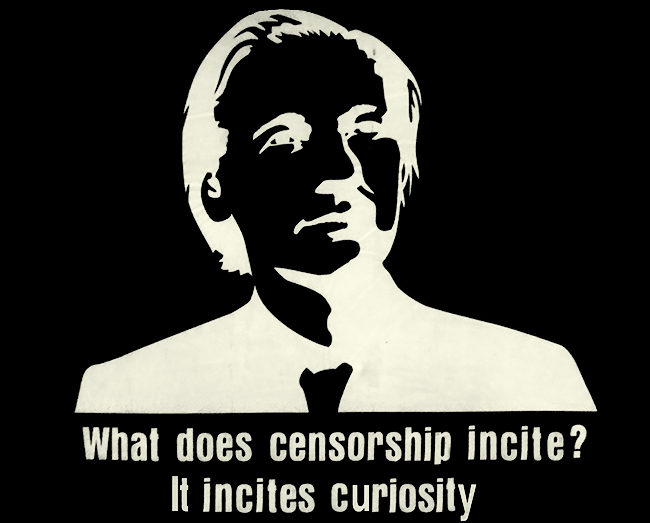 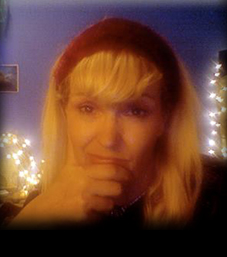 Cathy Vogan is a media artist from Ireland, Australia and France. She has been a university, art and film school lecturer since 1988 to the present. Vogan has worked extensively in broadcast postproduction since 1991, in France, Germany & in Australia, where as an Apple contractor she trained and supported networks around the country. Vogan has won eight awards for her personal films, including the Amnesty International Freedom Art Award (Critics’ Choice) in 2006. In 2010, she shifted to factual & became involved in independent journalism, with a special interest in the work of Wikileaks, Freedom of Information & Social Justice.

Vogan is the one-woman team behind ‘The Wikileaks Tapes’, a series of in-depth interviews and creative films about Wikileaks, with luminaries such as Daniel Ellsberg, Noam Chomsky and John Pilger. She has been publishing a media rich archive on Wikileaks here on thing2thing.com since December 2010. In 2014, Vogan began hosting a Sydney community radio show, with the aim of giving a voice to Aboriginal, refugee and activist communities. She currently produces and appears occasionally on the Consortium News weekly show CN Live!.

SITE NOT FOUND ===> History of thing2thing.com

In its current format, THING2THING (T2T) was created by Cathy Vogan (CaTV) in December 2010, as a vehicle for mixed media creation and commentary about Wikileaks, freedom of information and social justice.

The domain name thing2thing.com had previously belonged to Julian Assange’s “Institute”. It was originally registered for 5 years in 2005, for a purpose Assange had described thus, according to Daily Mail UK’s Jason Lewis on August 1st 2011:

The domain had expired however in September 2010, but the Daily Mail UK report had not been updated by late December, when Vogan attempted to visit the website, so the ’404 – Site Not Found’ return on the URL came as a surprise.

Finding the domain ownerless and for sale since 3 months earlier, Vogan feared that with the recent Daily Mail mention of it, and no doubt many other readers attempting to visit the site, someone would soon buy it. Someone perhaps, who understood how the internet works. A well-known domain name is a potential megaphone and can be valued in the same way as a clientele, in that people already know the address.

Or perhaps it would be acquired by someone with malicious intent, an entity even, which might misrepresent the domain’s prior activities in order to discredit Mr Assange and Wikileaks. Now who would do that? Or it could be anyone who read the Daily Mail UK and clicked on links. Vogan’s first thought was to protect the domain. Her second was to find someone trustworthy to buy it and write about Wikileaks publications. She contacted a friend in England – ‘Internotional Times’ (aka Michael K). He was a viral marketeer who worked with the Beatles’ Apple Corp (later Or Books) and a freedom of information advocate. Michael was also a journalist who had just had a parody piece about Julian Assange rejected by The Guardian. It was about 10am in Sydney. Michael in London was clearly asleep…

Somewhat fearing that the intelligence community might become interested in the domain’s new owner… Vogan decided to buy and co-ordinate thing2thing.com (T2T) as an outlet for publications related to the publications of Wikileaks – and the backlash. The mast-head read: ARTISTS AND WRITERS FOR WIKILEAKS AND FREEDOM OF SPEECH.

Within four hours of the domain acquisition, the first T2T article (Michael K’s) was published. It was viewed that day by 2.2K people. Indeed a megaphone, it seemed, and something to get as much talent and expertise behind as possible. Vogan had no background in journalism and it was clear in the following days that the first article had been confusing for some. Michael’s humour was dark and his target – Guardian journalism that was smearing Julian Assange’s reputation – was somewhat missed in the new context. It became clear soon after however that those involved in the T2T publications were exactly what the mast-head said.

Over the next months the T2T project attracted the participation of a number artists, writers and researchers, including US writer Nozomi Hayase and Irish cartoonist Sean Lennon. The office was a “secret” Facebook group, where research and fact-checking was done collectively, but the site was open to any artist or writer who wished to join the project. In March 2011, Vogan instructed those who were interested in contributing but “not technical” on how to do that: 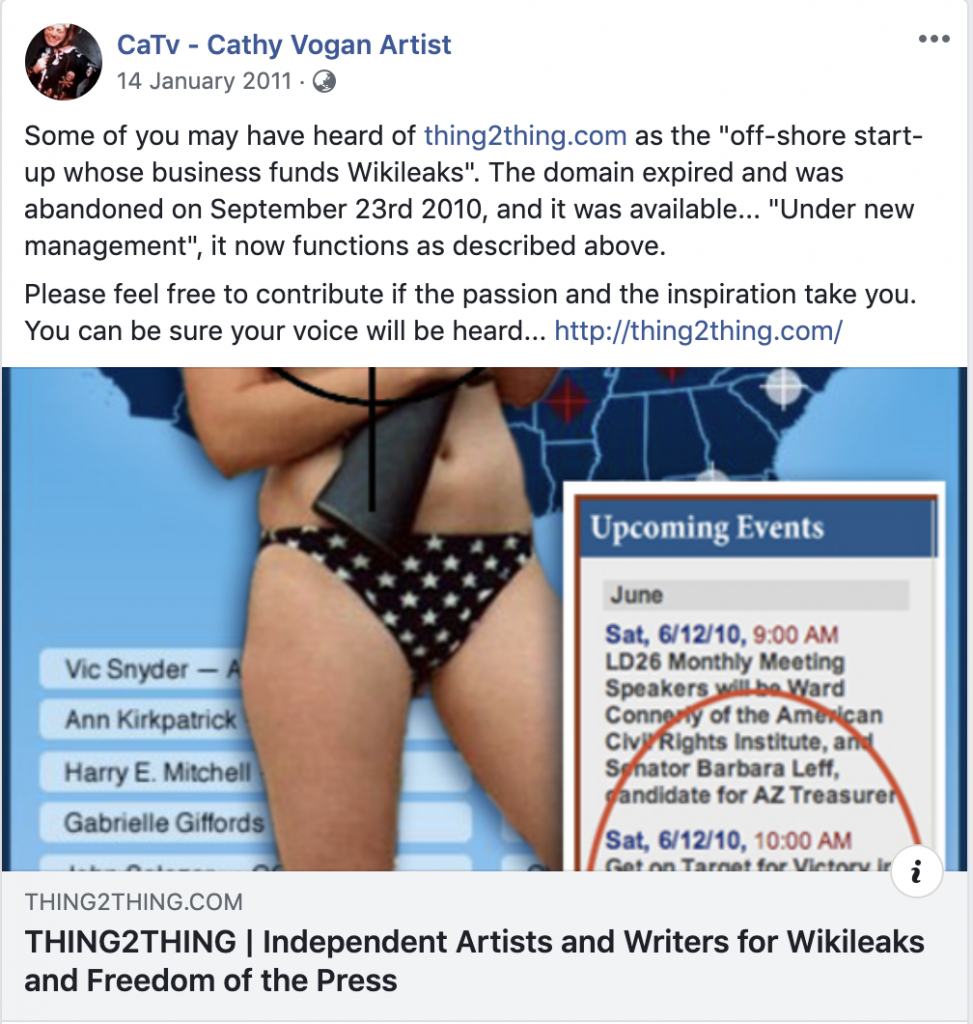 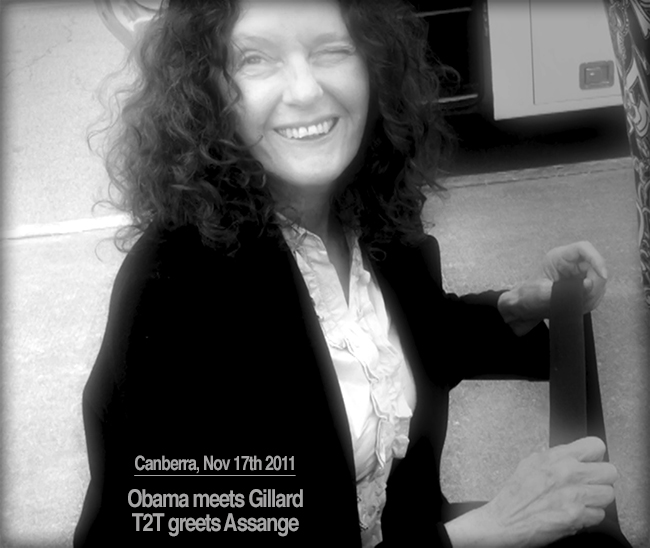 In collaboration with the T2T group, Vogan had been publishing for about ten months, when within the space of two weeks, she met up with Jennifer Robinson and both of Julian Assange’s parents, Christine Assange and John Shipton. Both parents told her they had been avid readers of T2T, and thanked her for the initiative. Days after meeting Christine, plans were drawn up between the two women for the series ‘Did You Have Any Idea?’, which later evolved into ‘The Wikileaks Tapes’.

The project began with a letter of recommendation that Assange’s mother sent to a number of prominent journalists, lawyers and media personalities, asking them to accord Vogan an interview. 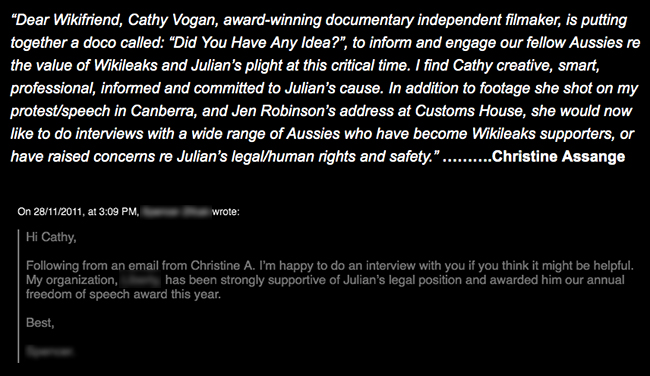 Special thanks must be given to Australia’s first national prime-time news anchorwoman, Mary Kostakidis, who not only responded with an interview, but greatly assisted Vogan in taking her first steps into the world of ‘serious’ journalism.

Initially surprised by the re-purposing of his domain into related journalism, Assange gave his approval in relation to Vogan’s reporting on Wikileaks and communications were established between her and his then close collaborator, Sarah Harrison. 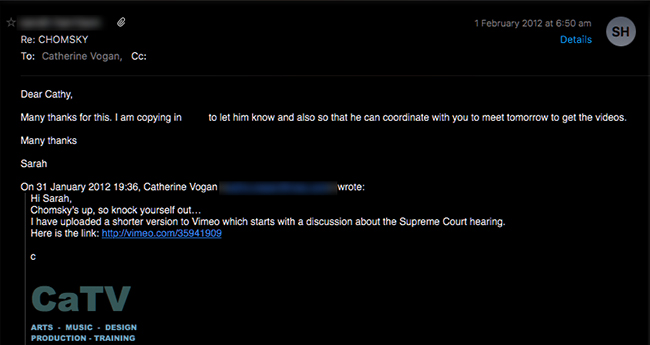 Vogan continued to work in close consultation with the Assange family and on June 19th 2012, with their assistance and that of the lawyer Kellie Tranter, authored the first editorial after Julian entered the Ecuadorian embassy: ‘Goodbye to the Swedish Oubliette’.

The audio visual material on this site has been mostly created by the author, and the editorial is strictly independent.

THE WIKILEAKS TAPES
24 films about the upstart Aussie start-up that changed the world!

This edition is born of a self-funded project called ‘Did You Have Any Idea?’ by Australian artist and citizen journalist Cathy Vogan, on her travels across Australia and the US. The mission was to chat, in her own informal way, with high profile and grass-roots supporters of Wikileaks.

This historical resource (on dual layer DVD) assembles the entire ‘Did You Have Any Idea?’ series, and other related films by Cathy Vogan, to give a wide-ranging perspective on the Wikileaks phenomenon. Read a review in Green Left Weekly. 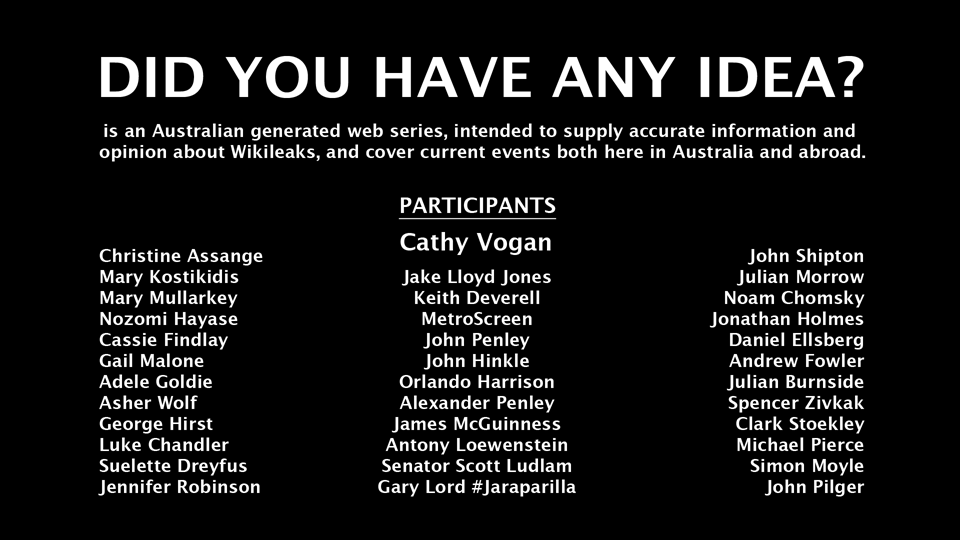 -
CITIZEN JOURNALISM
Citizen journalists are often characterised by their choice of one core issue they really care about, and are willing to research rampantly; day in, day out, for years. Thus their expertise on the subject tends to become second to none, even that of professional journalists, who are obliged by their employers to spread themselves across a variety of issues.

CJs often crowd-source and research their ideas within the context of specialised social media groups, comprised of other passionate individuals who voluntarily share their knowledge, offer feedback and facilitate connection to both sources of information and a world of readers.

The technically adept citizen journalist may act as the chosen megaphone, but the voice is collective. Together, they are the watch-dogs of the main-stream media, and each other… As a movement, citizen journalism is becoming the foundation stone of a more independent, diverse, and transparent historical record.

If you value the future of citizen journalism, then make it thrive by offering a donation. 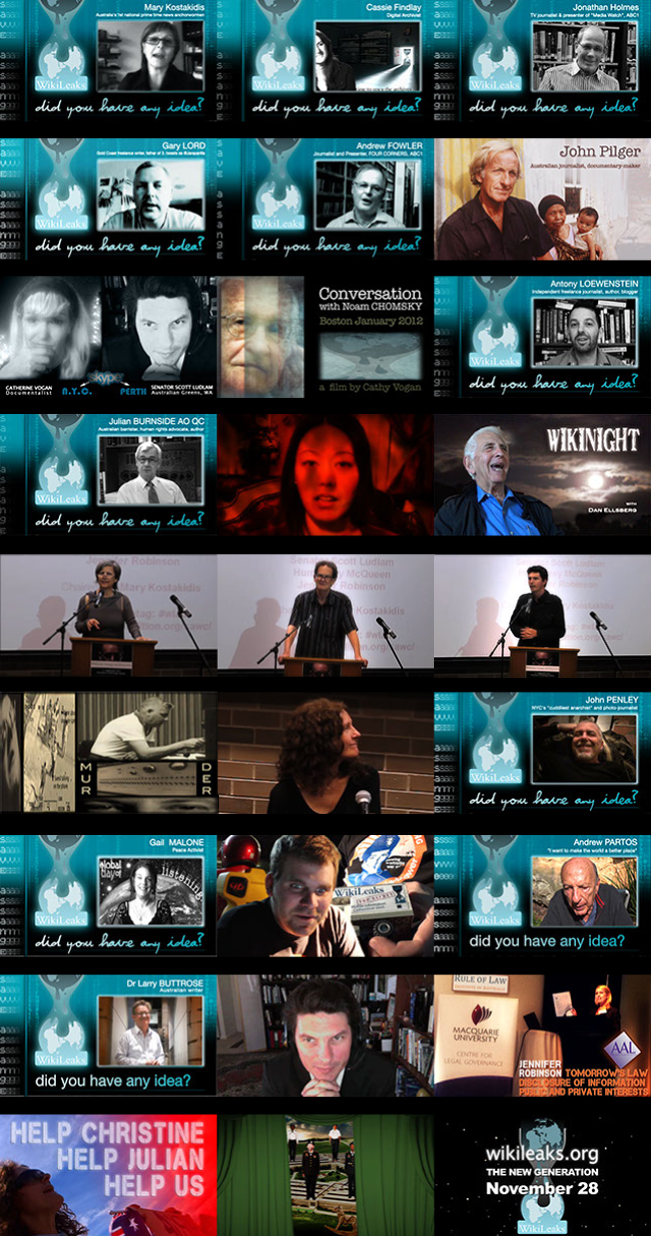 DID YOU HAVE ANY IDEA? - The Wikileaks web series by Cathy Vogan