Cutting the Clap-Trap on Russian Hacking: a Forensic Incision

James Clapper, the former director of US national intelligence, is still frequently called upon for commentary on Russian hacking. We saw his testimony strongly featured in Australia’s high profile, 3-part series by ABC’s Four Corners, ‘Trump/Russia’. 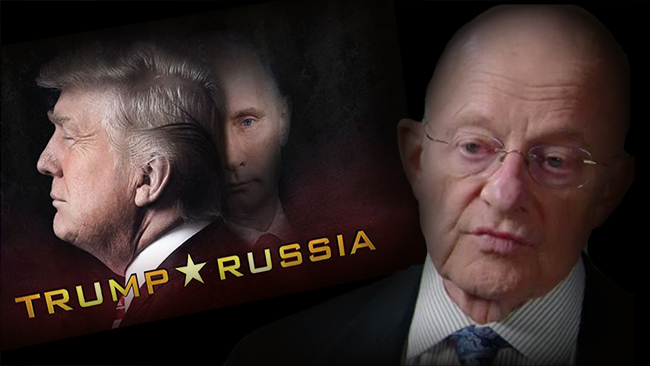 For those who recall, James Clapper is the man who ‘confirmed’ there were WMDs in Iraq (as did Rumsfeld, Cheney/Bush, Robert Mueller and others). He is also the man who claimed under oath that the US did not “wittingly” spy on all its citizens, which Edward Snowden later proved to be another lie.

Now former CIA analyst, Ray McGovern (off-camera), challenges Clapper with the forensic evidence – released a year ago – by a technical team from VIPS (Veteran Intelligence Professionals for Sanity), a group that includes William Binney, a former official & technical director at the NSA. Binney was the original architect of the US’s national security surveillance system.

VIPS’ hard evidence – of which we have seen none from the intelligence community to refute it – shows that the so-called ‘hacked’ emails were transferred at a speed that is impossible across the internet, and corresponds exactly with the rate of transfer to a USB stick. In other words, it was a local copy, which could only indicate an insider leak, not a remote hack. We must rely on the word of James Clapper, to believe otherwise.

VIPs also proved that the self-proclaimed hacker, Guccifer 2, was a fraud, while the Wikileaks Vault 7 release revealed that the CIA have a tool called Marble, which enables the insertion of a fake ‘digital footprint’ in a choice of foreign languages, including Chinese, Korean, Russian and Farsi.

What the VIPS forensic evidence implies is that Clapper lied again about Russian hacking. Yet their evidence goes unmentioned to this day by mainstream news outlets around the world. On the contrary, the MSN consistently refers to the DNC’s hacking narrative as fact, and the loyal bleat: “It’s Mueller’s time!” – unaware perhaps that he too lied, alongside Clapper, about the WMDs in Iraq.

Given that the DNC emails (which were not state secrets) weren’t hacked but leaked; both Binney and McGovern are wondering who the anonymous Russian hacker, ‘Guccifer 2′, really was. Technically, it is possible that this entity is a fabrication by the CIA, using the Marble framework.

We were warned that the Trump administration’s investigation, led by Robert Mueller, would be “disappointing”. Ray McGovern suggests he might end up telling us no more than Obama did, two days before leaving the Whitehouse; that the intelligence community’s evidence against Wikileaks collusion with Russian hackers was “inconclusive”.


“The conclusions of the intelligence community with respect to the Russian hacking were not conclusive as to whether WikiLeaks was witting or not in being the conduit through which we heard about the DNC e-mails that were leaked.”

Did things begin to unravel a few days ago, when Trump’s attorney, Rudi Guiliani said that as editor-in-chief, Julian Assange had committed no crime in publishing this material? Daniel Ellsberg opined that it was a very good sign, since Guiliani cited the First Amendment as the protector of press freedom, and made it clear that Wikileaks was a media outlet, just like the New York Times & Washington Post.

We know not yet, if Rudi has heralded back-tracking by Trump’s administration on the arguably stinky Russian hacking investigation. But if they do, and decide to stop pulverising Assange, there will still be an elephant in the room regarding the role of the media in all of the above.

If the press really is free, why does it unquestioningly echo the word of mouth from proven liars? Why doesn’t it print VIPS’ credible forensic evidence that refutes Clapper’s claims? Will it be happy to close the matter with he “made a mistake” again? Or will he eventually be held to account as “James Clap-Trapper”, whose lies started a war that killed many young Americans and hundreds of thousands of civilians? Whose lies denied that the privacy of every citizen in the world was breached, and abused? Whose lies fuelled another Cold War with Russia, and the beating of drums for a hot one?

Will the penny drop for journalists in the echo chamber, that throwing a journalist into the middle of the Russiagate narrative has the potential to threaten their very own freedoms, if ever they care to use them.