As I hear more about the Integrity Initiative (II), I am reminded of Julian Assange & Edward Snowden in 2013, on the militarised occupation of our private lives and the new great game.

Julian @AssangeDefence / @Snowden on the militarised occupation of our private lives and the new great game.

Years later we would realise, with a bang, the purpose of the new great game. 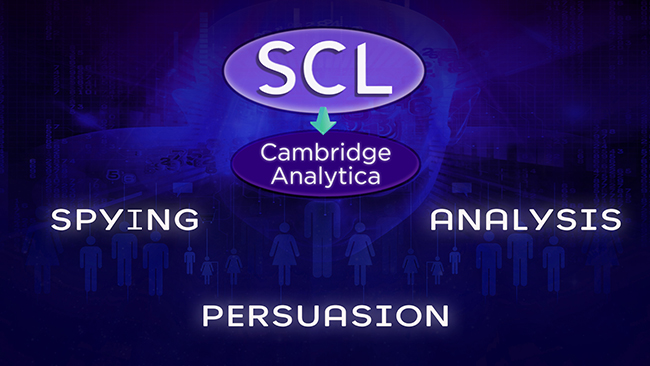 Spying—>Analysis—>Persuasion. The Mi(6)ssion was not just to collect information about the inner core of our lives, but using big data AI analysis, to learn how we as a society and as individuals, would be most vulnerable to misinformation, and apt to consent. Cambridge Analytica whistleblower, Chris Wylie, held a mirror to our nakedness in the face of such power, and to his company’s for-profit information operations, within the context of elections.

As they appear, the Integrity Initiative revelations, as well documented here by Robert Stevens on the WSWS, are steadily revealing that the same ‘national security’ bodies, who amended or ignored constitutional laws and collected everyone’s confidential information, are behind years of misinformation, with a view to a war. WW3 it seems. Stevens enlightens us on II’s involvement in the Skripal reporting, and the licence it gave Teresa May to lash out at Russia.

The pro-war ring of govt depts in the UK (Mod, FCO), the intelligence community, mainstream journalists, broadcasters & politicians, has been identified as state-sponsored propaganda, on the back of the public purse. To compound the scandal, the Integrity Initiative has been exposed as partisan, with the smearing of a party leader, Jeremy Corbyn, listed on its agenda.

We have also discovered that II is an international network, with “Clusters” of misinformation assets & outlets in other countries, including the US & Spain. That the Spanish Cluster misled the UK Parliament regarding links between Julian Assange and Russia; and that Guardian journalist, Luke Harding, misleads the world, with his “sources say” articles about Assange, Russia and Manafort, consistently void of evidence. Two other prominent Guardian journalists, including the 2018 Orwell Prize winner, Carole Cadwalladr, have been named in relation to II, as well as journalists from the BBC.

Most of the money comes from the UK govt.
Quite a lot from NATO.

Thanks Anonymous for giving peace a chance, even among friends. We didn’t know what to believe. The game is on again to move beyond Post-Truth.

In 2014, the Hawaii Democrat & presidential candidate, Tulsi Gabbard, advocated for ending warrantless NSA data collection on millions of innocent people, as a way to keep them safe. I can imagine that as the cynicism of an oppressed people, heavily subjected to information operations.

The NSA’s Thin-Thread architect, William Binney, has been saying the same thing for 17 years. As the name suggests, his program narrowed down surveillance to highly probable criminals, and by default, guaranteed everyone else’s privacy. [Unfortunately it was replaced by the dragnet program, Trailblazer, 3 weeks before 9/11, and the Saudis got lost in a haystack...]