Wikileaks and the ‘Underground’ Party Tour – don’t miss it!

Cassie Findlay, spokeswoman for the National Council of the newly-formed Australian Wikileaks Party, delivered a moving introductory address this week to a capacity crowd at Sydney’s Chauvel Cinema. The occasion was part of a national tour of Robert Connolly’s film “Underground”, which tells the story of teenage Julian Assange, and his roller-coaster beginnings as an online activist. 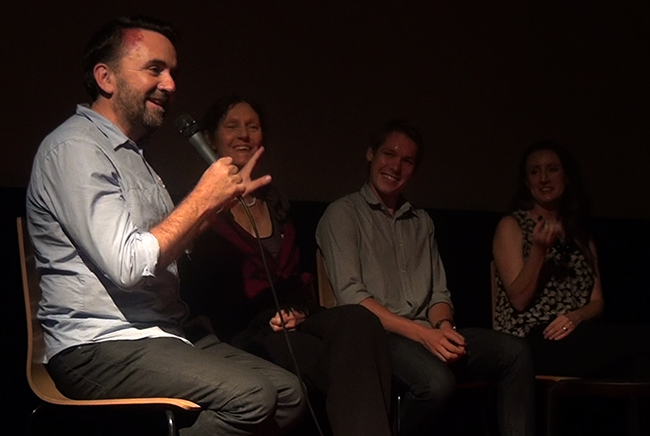 Christine Assange, Robert Connolly, actor Alex Williams and SBS journalist Mark Davis were onstage afterwards for a Q & A with the audience. They were later joined by Linda Pearson from the Support Assange and Wikileaks Coalition (SAWC), who called for strong action to repatriate Julian Assange, now entering his tenth month of refuge at London’s Ecuadorian Embassy.

Tour organisers Kaz Cochrane and Samantha Castro, who founded the Wikileaks Australian Citizens Alliance (WACA), and who are co-members of the Party’s National Council, will also deliver personalised speeches during the film’s nationwide tour. 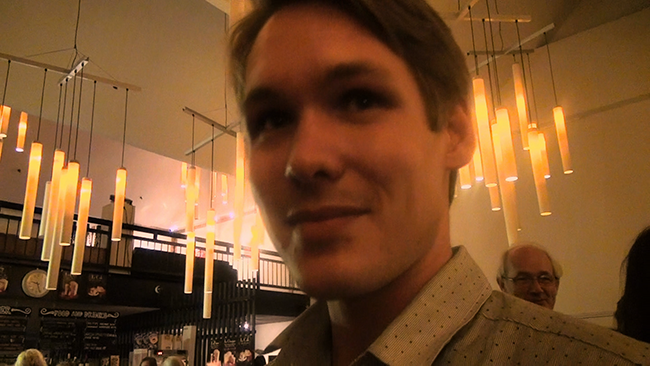 -
Of particular note was the solidarity expressed by the filmmakers and cast with their subject. No surprise, given the track record of award-winning director, Rob Connolly, in making politically conscious films, such as ‘Balibo’, and ‘The Bank’, where the gap between art and life has merely been widened to protect the innocent. Rob muses as I quote Alexa O’Brian’s fleeting tweet: “We don’t need any more Hollywood film scripts. We need transcripts of what’s actually happening in the court room”, and we are both reminded of Assange’s recent gripes regarding the proposed opening scenes of ‘The Fifth Estate’. A sequel to ‘Underground’ is apparently not out of the question… “Watch this space”, he says, and we really do hope he fills it.

In the more immediate future, the ‘Underground’ Party Tour will continue throughout Australia. These legendary events have had a tendency so far to play to packed houses, so it’s probably best to buy tickets in advance. Go to the WACA website to (check the dates) and your closest cinema. And to everyone’s great surprise, ‘Underground’ has been selected to open the Washington DC International Film Festival – “in the cradle of American government!” in just two weeks time.

Film critic Eddie Cockrell, our moderator for the Sydney event, Variety and SBS columnist, and the man who just happens to have written catalogues for the Washington Film Festival for decades… reckons it will solicit “A very good reaction!”. 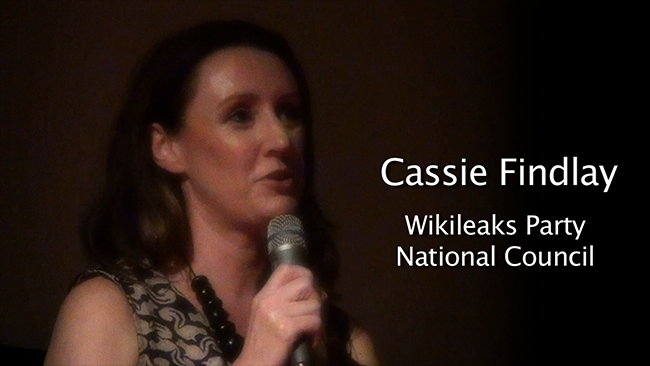 Cassie Findlay speaks on behalf of the Australian Wikileaks Party

“It’s been an interesting process. Especially for someone like me who comes from a background of being archivist and not involved in political campaigning before. And indeed a lot of the members of the National Council of the WikiLeaks Party come from really interesting and diverse backgrounds that bring a certain humanity, I think, to our endeavour. So, we have a physicist, we have activists, we have mothers, we have young people, we have people of an older generation. And we’ve been working very hard since, well, certainly some members of the Council since last year. And in earnest this year to put together a Party which I think is about addressing what is missing in Australian politics at the moment which is truth, transparency, a sense of standing up to power. A sense of understanding for yourself what’s actually going on and if we look at, you know, the major parties that are going to be contesting the next election in September, is there much choice? Both of them are sitting mainly on the right. Of course, we have the Australian Greens it’s true. But what we’re doing is putting a candidate up for the Senate who has the most amazing track record of actually scrutinising and understanding information about what’s happening politically, what’s happening across the world and in Australia, and who certainly demonstrated an ability to stand up for what’s right. So, one of our National Council members, Greg Barnes spoke last week in Melbourne about the Party and about putting a candidate up for the Senate where, what we’ve seen rather than a house of review it’s become a house of deals. Well, the WikiLeaks Party and Julian in the Senate will be against that, we’ll be standing up for the Australian people.”

3 Responses to Wikileaks and the ‘Underground’ Party Tour – don’t miss it!