Christine Assange speaks out for Julian

On August 9th, Sydney beamed out strong support for Julian Assange with a live-to-air event: ‘THE GAGGING OF JULIAN ASSANGE’. The venue, with live audience, was Politics in the Pub at the Sydney Gaelic Club. Thanks goes to the #Unity4J movement and particularly its ‘Stream Team’, for their invaluable technical support.

The remote guest speakers were Julian’s mother, Christine Assange, and the President of the New Zealand Internet Party, Suzie Dawson, who spoke to the audience live from Moscow.

In Sydney, the speakers were Cathy Vogan, Professor Stuart Rees and Mike Head. Christine was interviewed two days earlier by Cathy Vogan, and this was pre-loaded to the stream. There had been ‘mysterious problems’, in getting her connected to the live monthly VIGILS that #Unity4J have been running, so no risks were taken…

Here is the entire show, as broadcast on August 9th, with a direct link to Suzie Dawson’s talk. As viewers will see from the opening remarks by Vogan, there was a power failure (and internet lockout) while Christine’s interview was playing. Dawson focuses on the #Unity4J movement to save Julian – now 2700 people strong, and comprised of artists, writers, techs and speakers. She addresses the idea of bringing together people with different political opinions, who have one common aim, and how that’s been panning out.

Big shout-out to Gard Lord, @Jarraparilla, for this list of the main points made by Christine Assange:

*** “UK extradition does not require a prima facie case… There is absolutely no proper legal process for my son. The US Grand Jury is in secret… it has no defence allowed and it has no judge…”

*** “If UK get him on the [bail] warrant, which should be defunct, they can then drop that [and] serve the Grand Jury indictment with no proper legal process. Then they can extradite Julian to the US, again without legal process because you don’t have to present a prima facie case…”

*** “And then, when he gets to USA, under the National Defence Authorisation Act, he can be detained indefinitely without trial and face the death penalty, or 45 years in jail, if we see him at all for trial. It’s horrific.”

*** “And the Australian government has done NOTHING. Julian has tried to renew his passport but the computer won’t allow him to do that, which means that the government is not allowing him to do it.”

*** Christine suggests that UK govt did not extradite Gary McKinnon or @FreeLauriLove because they were UK citizens and the groundswell of outrage would have made it harder for them to extradite her son @JulianAssange.

*** Christine believes the #Russiavape collusion narrative is designed to make it easier to charge Julian with espionage and avoid First Amendment protections. She notes how @SamAdamsAward US intel veterans have defended @JulianAssange and don’t believe Russia was @wikileaks source.

*** Christine notes a former CIA officer claiming infiltration of international state media. She says @abcnews “are the worst” & wonders if they are infiltrated. “I have had to pull them up on calling Julian a hacker. Constantly. They will not refer to him as a journalist.”

*** “Julian is dying. He is being slowly murdered. And this is the really disgusting thing: they’ve got nothing to charge him with. Because he’s done nothing wrong.”

*** “So they have chosen deliberately not to go to court, to keep him detained, to refuse him the normal requirements of life – fresh air, exercise, sunshine, medical care – so that he will gradually die.”

*** “His doctors are saying that if he is not gotten out of there, that’s exactly what will happen: he will die. He has irreversible damage to his mind and body now. He has been in chronic pain for 2 years. And UK refuses safe passage to go to a hospital.”

*** “I could never be as brave as Julian. Most people couldn’t. But what we can do for people in his situation is stand up for them. We can stand up to our governments and say No! Evil is not going to flourish because good men are going to do something.”

“Don’t we tell our children to stand up to bullying? Well I’m asking the Australian people to stand up & say NO. We’re better than this. We’re not gonna let this happen. If you don’t have the guts to do it, Malcolm Turnbull, we’re going to make you do it.”

*** “I want to say thank you to everyone who has stood up and is standing up. It does make a difference. You mightn’t think anything is being stopped but I think it is.. It’s not only boosting @JulianAssange’s morale but also his family’s morale, for us to keep going.”

*** “My son hasn’t felt the grass on his feet for six years. His eyesight is failing because he can’t look into the distance. If this was going on in a Third World country, or Russia, they would all be screaming at the top of their lungs.”

*** “They did more for one of the worst pedophiles the world has ever seen, Peter Scully, who was raping & killing babies. The Australian govt offered Consular Support and $500K! They go & bail out people who have been CHARGED with smuggling drugs!”

*** Christine notes @wikileaks revealed Hillary’s cynical plot to overthrow Gaddafi as a prelude to her run for President. Libya’s collapse has now triggered waves of refugees. “I see a lot of people protesting… Where are they for my son? He is a political refugee!”

*** “Liberty isn’t something that we just attain. We’ve got to continually fight for it. Because there are always people trying to take it away. Never has liberty been more under threat than right now, because of the technology [that Julian helped expose].”

*** “Both Left and Right can abuse power. Within the #Unity4J movement I am working with all sorts of people. What they all have in common is support for democracy and free speech, a free press, fair legal process and human rights. We can all come together on that.” 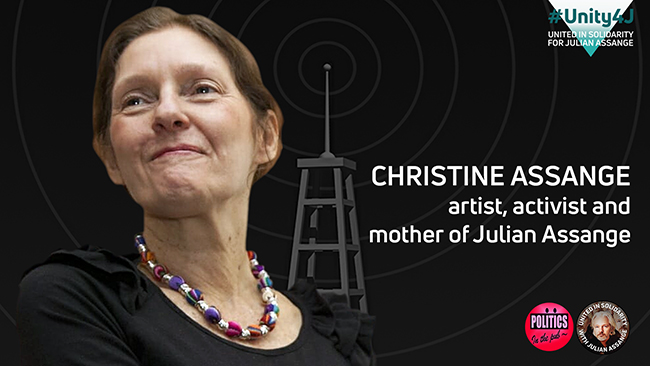 Christine Assange speaks out for her son Julian. Sydney, August 9 2018