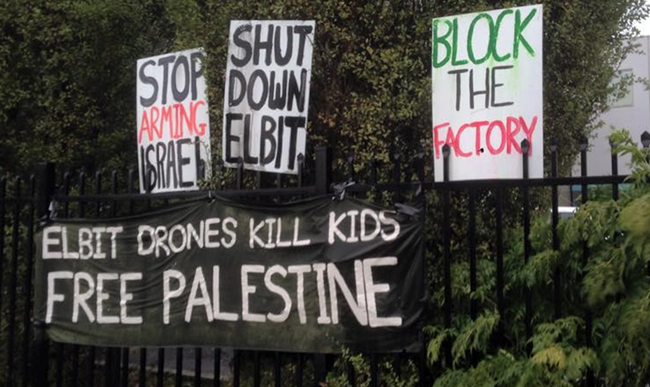 At 8am members of the Melbourne Palestine Action Coalition (MPAC) shut down the headquarters of Israeli arms manufacturer, ELBIT SYSTEMS, at 235 Ingles St Port Melbourne to mark the first anniversary of the 2014 Israeli ‘Protective Edge’ assault on Gaza. The group have blockaded access to the building and currently have two people locked on to the entrance gate, who state that they are prepared to remain there as long as possible. This is the second time the pro-Palestinian group has disrupted Elbit Systems, the first time being in August 2014 when they occupied the building’s roof and blockaded the entrance to Elbit during the 2014 Israeli attack on Gaza.

“This blockade is part of an International campaign to shut down Elbit Systems and coincides with events in London later today, to mark the anniversary of the deadly assault on GAZA last year. We are here today to demand the Australian Government end military trade deals with Israel and cancel all domestic contracts with Elbit Systems. We, like many other groups around the world, call on the UN and all governments to take immediate steps to implement a comprehensive and legally binding military embargo on Israel.” 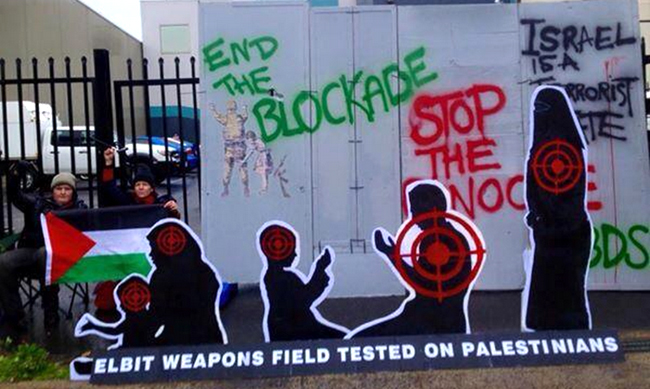 Braving the cold and the cold-hearted, Melbourne activists lock on to a shut factory gate at Elbit Systems

Elbit Systems is one of the world’s leading manufacturers of unmanned aerial drones used by the Israel Defense Forces (IDF) in their ongoing siege and frequent military offensives in Gaza. MPAC are also targeting the arms manufacturer over domestic contracts with the Australian military and federal police. The group claim the Australian government have awarded 185 procurement contracts to of Australian tax payer dollars, during a period which saw the most egregious crimes against the Palestinian people in the near 50-year illegal Israeli occupation of their lives and territories, including;

“Israel’s ability to launch such devastating attacks with impunity largely stems from the vast international military cooperation and trade that it maintains with complicit governments across the world, one of the most vigorous funders being the Australian Government. By importing and exporting arms to Israel and facilitating the development of Israeli military technology, governments are effectively sending a clear message of approval for Israel’s military aggression, including its war crimes and possible crimes against humanity” 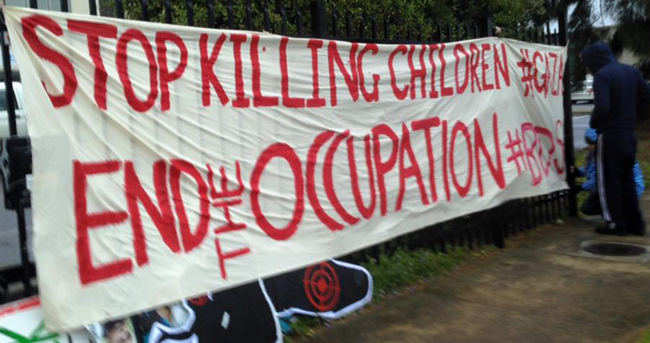 In the final report from the United Nations Fact Finding Mission on the 2014 Israel–Gaza conflict, issued on June 22, 2015, the UN state “serious violations of international humanitarian law” that “may amount to war crimes” and that “impunity prevails across the board” regarding the actions of Israeli forces in Gaza.

UN Representative for the report, Ms. McGowan Davis, hopes the report will persuade governments to address “the crying need” for changes in policies regarding the use of weapons with a wide-area effect in densely populated areas. The commission said that “the scale of the devastation was unprecedented” in Gaza, where it counted 2,251 Palestinian deaths and 18,000 homes destroyed.

“This is just the beginning of a global campaign to stop the war profiteering of private corporations off the people of Palestine and others around the world. Israel’s military technology is marketed as “field-tested” and exported across the world. Military trade and joint military-related research relations with Israel embolden Israeli impunity in committing grave violations of international law and facilitate the entrenchment of Israel’s system of occupation, colonisation and systematic denial of Palestinian rights.