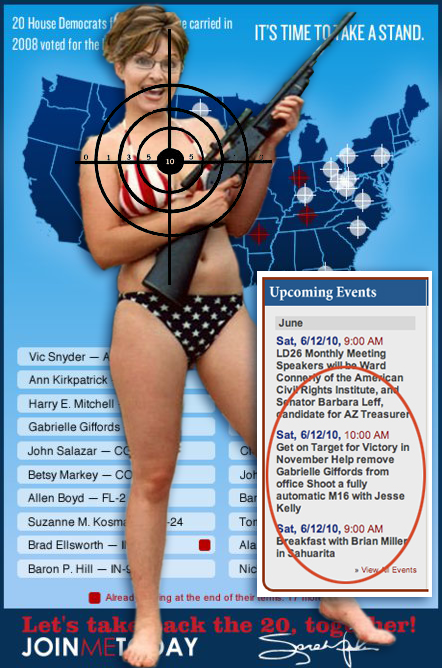 Wikileaks today offered sympathy and condolences to the victims of the Tucson shooting together with best wishes for the recovery of U.S. Representative Gabrielle Giffords. Giffords, a democrat from Arizona’s 8th district, was the target of a shooting spree at a Jan 8 political event in which six others were killed.

Tucson Sheriff Clarence Dupnik, leading the investigation into the Gifford shooting, said that “vitriolic rhetoric” intended to “inflame the public on a daily basis … has [an] impact on people, especially who are unbalanced personalities to begin with.” Dupnik also observed that officials and media personalities engaging in violent rhetoric “have to consider that they have some responsibility when incidents like this occur and may occur in the future.”

WikiLeaks staff and contributors have also been the target of unprecedented violent rhetoric by US prominent media personalities, including Sarah Palin, who urged the US administration to “Hunt down the WikiLeaks chief like the Taliban”. Prominent US politician Mike Huckabee called for the execution of WikiLeaks spokesman Julian Assange on his Fox News program last November, and Fox News commentator Bob Beckel, referring to Assange, publicly called for people to “illegally shoot the son of a bitch.” US radio personality Rush Limbaugh has called for pressure to “Give [Fox News President Roger] Ailes the order and [then] there is no Assange, I’ll guarantee you, and there will be no fingerprints on it.”, while the Washington Times columnist Jeffery T. Kuhner titled his column “Assassinate Assange” captioned with a picture Julian Assange overlayed with a gun site, blood spatters, and “WANTED DEAD or ALIVE” with the alive crossed out.

John Hawkins of Townhall.com has stated “If Julian Assange is shot in the head tomorrow or if his car is blown up when he turns the key, what message do you think that would send about releasing sensitive American data?”

Christian Whiton in a Fox News opinion piece called for violence against WikiLeaks publishers and editors, saying the US should “designate WikiLeaks and its officers as enemy combatants, paving the way for non-judicial actions against them.”

WikiLeaks spokesman Julian Assange said: “No organisation anywhere in the world is a more devoted advocate of free speech than Wikileaks but when senior politicians and attention seeking media commentators call for specific individuals or groups of people to be killed they should be charged with incitement — to murder. Those who call for an act of murder deserve as significant share of the guilt as those raising a gun to pull the trigger.”

“WikiLeaks has many young staff, volunteers and supporters in the same geographic vicinity as these the broadcast or circulation of these incitements to kill. We have also seen mentally unstable people travel from the US and other counties to other locations. Consequently we have to engage in extreme security measures.”

“We call on US authorities and others to protect the rule of law by aggressively prosecuting these and similar incitements to kill. A civil nation of laws can not have prominent members of society constantly calling for the murder and assassination of other individuals or groups.”