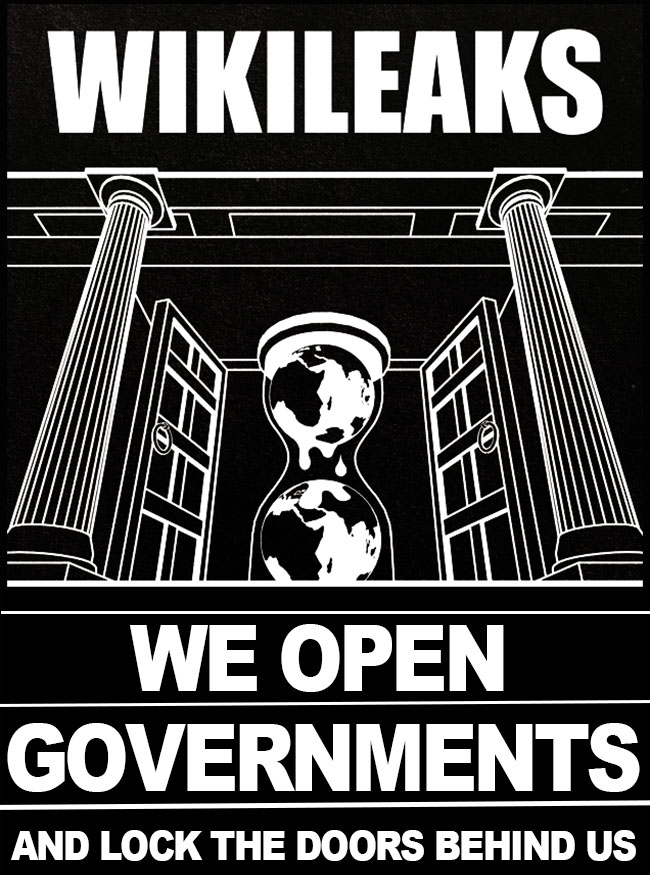 For those who are ‘newbies’ to the cause of defending Wikileaks, it might be interesting to read what John Young of Cryptome.org had to say to Italian journalist Stefania Maurizi back in 2010 about “the organisation”, not long before she would go off to Berlin to meet Julian Assange, and get her “scoop” on the Afghan War Diaries. Stefania wasn’t at all phased, and neither were we, by what Young had to say. But what would she say today?

Well, Stefania Maurizi just tweeted something today about Wikileaks, and by startling coincidence, the link takes us back to Cryptome.org:

A phrase leaps out from those last lines, as if in echo of what Young had said, years before:

“[Julian Assange] represents the flip side of the government arrogance he’s fighting.”

Is that what she’s referring to in terms of the mask being thrown away? Of course not. She’s talking about the state journalist’s hidden agenda – a propensity to echo his master’s voice. Hmmm, is there not just a tinge of irony there?

There’s another phrase that would echo ironically for Christine Assange and the Australian activists / Wikileaks Party casualties she is attempting to defend – all of whom would take another bullet, to defend Wikileaks and Julian’s human rights. It could even cause us to hang our heads in despairing cringe:

It has been tragic to witness the cold, corporate responses from @wikileaks – aka Julian Assange – to the “most trusted” Wikileaks Australian Citizens Alliance founders, Sam Castro and Kas Cochrane, both of whom resigned recently from the National Council of the Wikileaks Party. The issue related to lack of transparency, but in her recent series of tweets to Julian from the WACA account, Christine made the context amply clear:

She even spells it out: 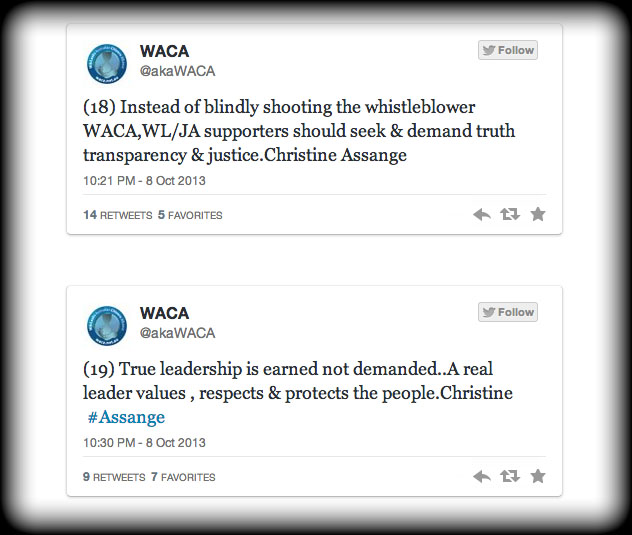 But Julian largely ignores the SOS messages from his mother. They are asking him to look after his flock… and to be objective, or at least HUMANE! Instead, he absurdly persists with a Pentagon-like MO of demonising the whistle-blowers. Oh… and asserting his “registered trademark” – but Anonymous set the records straight by asserting that “Wikileaks” and “Assange” can be applied for as trademarks in Australia for $299.

As the mask grows thin, one gets the impression that Julian would be better off seeking allegiance with the grass roots of Australia. They are so apt to defend their underdogs…

But alas… many of Julian’s most faithful, diligent and influential Australian supporters, who refuse to adhere to the mis-guided “dis-endorsement” of akaWACA, are receiving pretty much the same feedback. They have been pleading with Assange to stop hammering allies, lest he destroy his own credibility. There’s too many in disagreement now, to turn EVERYONE into Daniel Domscheit Berg. It seems however that the mask of power has tragically melded with Julian’s face and he can’t get it off.

Oh Julian… just look at yourself.

“As far as I can see there is no journalist willing to probe deeply and at length into Wikileaks due to its masterful manipulation of media and its artful concealment of its operation under guise of necessary security. Simply put, Wikileaks behaves like a secret spy operation.”

“Bear in mind that when I say spy, spies and spying, I mean anyone or any organization [sic] that operates the way official spies do — journalists, scholars, researchers, priests, government employees, citizens, businesses, and so on. Official spies operate in conjunction with these others, learn from them, hire them, give contracts to them, exchange favors — cheat, lie and steal, perhaps murder.”

SM: 1) What makes you to believe that Wikileaks behaves like a secret spy operation? And who would be in charge of this op? The CIA? The Mossad? What are its purposes?

JY: All of Wikileaks operations are those of secret spying operations. Egotistical, bumbling, lack of transparency, exaggerated assurances of confidentiality, obscurity about internal affairs, unverifiable claims and assertions, asymmetry in protection (always the spy’s over the dupes), exaggeration of the importance of information provided, few if any admissions of errors, heroic risks from powerful enemies, and much more. Hyperbolic claims about serving the public and protecting the weak — as a “news” person you know this well.

SM: 2) Wikileaks did leak documents concerning the U.S., Britain, Israel, Germany , prominent banks like the Julius Baer Bank, etc. So it doesn’t seem to me that Wikileaks is supporting any country, don’t you think so?

JY: There is no way to tell due to lack of transparency. Spies typically cloak their operations by misleading disclosures. Nationalism is not the issue. The issue is vainglory about information control — leaks if you will, sometimes called news.

SM: 3) Even people like Daniel Ellsberg, the famous leaker of the ‘Pentagon Papers’, was skeptical about Wikileaks, at the beginning. However, yesterday I had an interview with him and he told me that Wikileaks is doing a good job and he overcame the doubts he had at the beginning. Don’t you think that leaks such as the “Collateral Murder” video are great stuff?

JY: Ellsberg appears to have been duped, either by himself or by others. His fondness for public appearance to recount his personal experience is unsettling. He has repeatedly exaggerated threats to Wikileaks and Assange by invoking his own experience.

The short version of Collateral Murder was a media event. The longer version tells a different story, more nuanced and informative. “Great stuff” is hypebole for the short version. The long version is not great stuff. Wash your mouth.

SM: 4) You write that recent events indicates that deception is integral. What do you mean exactly?

SM: 5) You write that recent events have put in jeopardy those who have provided information to Wikileaks. HOwever, apart from Bradley Manning, no leakers had troubles due to leaks to Wikileaks and, starting 4 years ago, they leaked hundreds of hot documents, so I think it is a good record. Isn’t it?

JY: Due to lack of transparency there is no way of knowing who has been exposed, enrapped, extorted, quietened, censored, or worse, only unsupported vainglorious claims have been made. It is common for spies to make such appealing claims to assure participation of sources and agents.

The hundreds of “hot documents” (hyperbole) likely include planted and orchestrated leaks. What is not known is what non-hot but information documents have been ignored for the hot ones, and now the video bombshells.

A technique used to build credibility of a spy-run outlet is seed it with alluring documents. There is no way of knowing where the documents came from. Instead, Wikileaks asserts validation by its own members, all unknown and without public substantiation — a favorite of spies and cousins, con artists and flacks — this too you know well.

SM: 6) You write: “There is a personal , legal and political risk for being duped in this matter. From my first contact with Wikileaks during its formation, this has been true.”. What do you mean exactly?

JY: Anybody who has willingly linked to Wikileaks by participation or by submission of materials is implicated in what it turns out to be, or is converted into, or changed by desperation, bribes and lure of fame. This can be used to manipulate, extort and threaten by use of supposedly confidential and secret information. This is the basic means to control participants in spying and criminal operations — suck them in then threaten exposurem a favorite of agents provocateurs and undercover cops and spies.

This is the fault and beauty of secret operations whether used by journos, sex partners, official spies, the lot of those who fear transparency and symmetry, who out of cowardice seek to gain unfair advantage.