I was shocked to discover that the Wikileaks Party’s long-awaited, and recently released Independent Review FAILED to mention a hefty submission made by the former Council member and national spokesperson for the WLP, Sam Castro.

For the record, a number of WLP members, including myself, were carbon copied on that submission on 23/09/13. Sam Castro sent it directly to Stuart Bell of Bell Campbell Auditing, after having spoken at length with him on the phone.

Sam related from their first conversation, that Bell, whom she described as a “a very sincere person”, was surprised to hear from her, since he himself had not seen the Review’s Terms of Reference [TORs]. He was more surprised to learn that they were already published on the party website, with his company’s name attached.

In a follow-up email to Bell, Castro confirmed:

“I noted that the TORs on the WLP website, that you had not seen, are so narrow they do not cover what happened prior to or after the GVT submission on Saturday 17th Sept, which obviously does not include the time frame in which the revelation of the corruption and coverup led to our resignations.”

When Castro asked whose communications he was supposed to look at, Bell replied that he could not say, but admitted that no one who had resigned from the Party was on the list of ‘Preference Decision-Makers’, supplied to him by the Party CEO, John Shipton.

NOT a candidate, not 4 National Council Members, not a Social Media Coordinator or a National Volunteer Co-Ordinator, 5 of whom were ‘Preference Decision-Makers’. The communications of the following people were to be ignored: NC members Sam Castro, Kaz Cochrane, Dan Matthews and Luke Pearson and Victorian Candidate Leslie Cannold.

During their first contact, Stuart Bell had openly acknowledged to Castro that he, the ‘independent’ reviewer, was actually a member of the WLP, and an accountant who had already offered his services to the Party – a fact she immediately made public.

This was denied by a senior Party member on Twitter late last year, but has now been admitted by Bell himself – as a disclaimer? – within the ‘Independent’ Review.

Stuart Bell kept very quiet however, about the burying of Sam Castro’s submission. He states:

Bell does not mention any of his discussions with Sam Castro, or her written submission, which he should have received twice. His lamenting of an “inability or access to all relevant information and WLP personnel.” is a smoke-screen. Bell did interview someone other than John Shipton and is not disclosing this.

Was there a “No Access to Sam Castro” directive issued to the WLP member Stuart Bell of Bell Auditing? Is that what he is really whinging about? Then he should come come clean about that too, because what Bell seems to have collaborated in is a highly biased omission of evidence and the suppression of a witness from an ‘Independent’ Review. Not good, considering the reputation his company has to maintain. I heard Bell did the job pro bono – “for the public good”. One could offer the opinion that the public is better with the whole truth (names redacted where necessary to protect lives…) and with information that is reliable.

Castro also copied me on the final day for submissions, September 29th, when she reluctantly sent her material to/via the Wikileaks Party as well – as per their objectionable ‘filtering’ conditions – just to be sure it would be included! 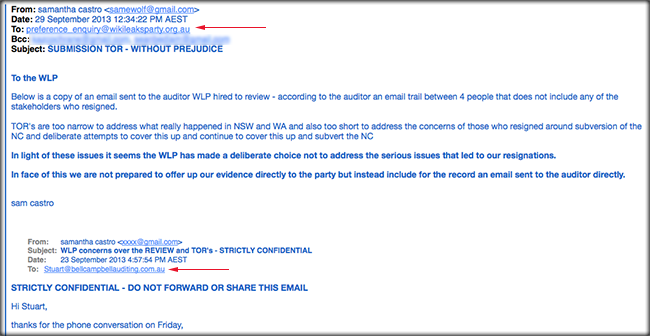 .
The author of the Independent Review specifies as “Background” to his report:

“The author was approached by John Shipton, to assess information provided by Preference Decision-Makers and make recommendations”

But despite her extended efforts as a ‘Preference Decision-Maker’ to contribute information to the assessment, the submission of the Party’s former National Spokeswoman was not entered into the public record. Like the minutes of those last meetings, which would have documented what Dan Matthews just reminded us was the final, “binding resolution” of the National Council – it’s apparently shredded wheat…

Yet tagged on to Bell Auditing’s report, presumably by the Wikileaks Party, was an isolated email – a solitary “A” without a sequel – dating from one week before the time-frame specified within their own Terms of Reference. 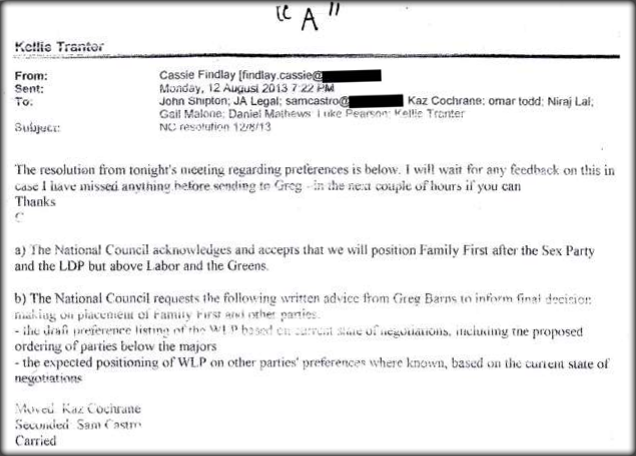 Its contents give quite the opposite impression of where the National Council stood, but according to Dan Matthews and others who resigned, this position was completely superseded and overturned by majority vote in the week that followed.

Actually there’s another WLP “Uncensored” Review floating round; one that gives a much clearer picture of what happened just before the WLP preferences were submitted. It contains an email thread that was circulated between four people (only) the morning after the National Council’s “binding decision”, and reveals their “tweaks” of the Party’s GVTs. The subject of the email is: “Version 2 tweaked” and the message: “Sorry, more Tweaks coming soon”, but the other Preference Decision-Makers are not copied in on the communications. Even Julian Assange, it would appear, was not copied in on all of the communications regarding preferencing in WA…

The film also leaks phone discussions on the day of the mass resignations. Juicy!

.
Sam Castro was asked to comment soon after she had read Bell’s review, and replied:

“I’ll have to think for a few days about what course of action I’m going to take, but my immediate reaction is that I hate what they are doing.”

“They”? Who’s left? Looking at the WLP website today, I noticed that another 3 National Council members – Cassie Findlay, Kellie Tranter and Niraj Lal – have left, presumably exiting quietly via the back door… A shame that all of the heroic and tireless “Wiki-women”, bar one, have resigned now from the Party’s executive. Most of them however, including Sam Castro, remain to this day paid up members of the Wikileaks Party.