Kristinn Hrafnsson, spokesman for Wikileaks, has recently offered a statement to Australia’s Green Left Weekly, entitled: “The real story of WikiLeaks and Sweden”. In it he details how the tabloid newspaper Expressen claimed WikiLeaks was preparing a “smear campaign” against Sweden, citing as sources both a WikiLeaks ’insider’ and WikiLeaks “internal memo”.

Hrafnsson challenges the newspaper to publish the cited memo, since he asserts that it does not exist, and that the reporting of Wikileaks’ intended attack on Sweden is grounded on nothing more than “thin air”. 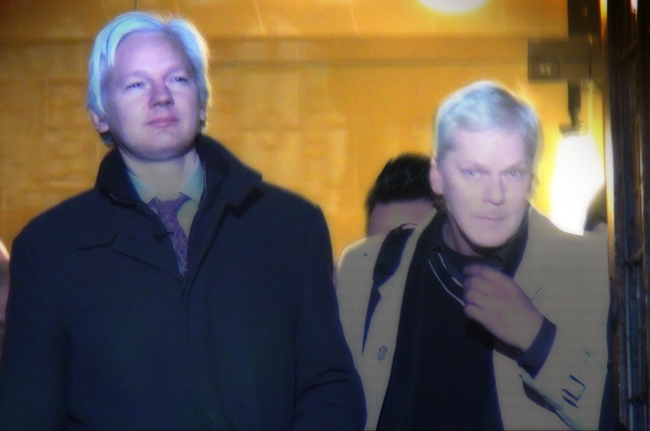 I draw attention to what would seem to be another, somewhat related  fabrication by Expressen, in conjunction with three other tabloid newspapers, as scrutinised by Professor Marcello de Noli in the following article. It’s curiously a very long story, that dates back to at least 1993 for Expressen: 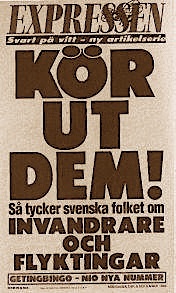 << THROW THEM OUT! >> "What Swedish people think of immigrants and refugees". Expressen’s Front-page 1993

It would appear that a “wide-spread” problem of honour-related violence and killings in Sweden has been INVENTED by these newspapers to persecute immigrants and particularly Muslims. Between 1986 and 2010, so-called honour-related killings among the Muslim population in Sweden amounted to only 0,0001 percent, yet Expressen, along with Aftonbladet, Dagens Nyheter, and Svenska Dagblade have published over 1000 articles on the issue of “honour-related” killings.

Since one of the most serious of these groundless, racist attacks preceded Sweden’s involvement in the Afghan war, and since the author also details collaboration in the myth from certain politicians and government agencies, one might conclude that this air is not thin, but thick with political intent! One might also see, thanks to de Noli’s closer analysis, a mesh of corroboration rather than just the fabulist reporting of one single newspaper…

De Noli cites for example, the Development Centre of Gothenburg, an institution of the Swedish Prosecution Authority led by none other than Chief prosecutor Marianne Ny, which has issued a public document entitled “Honour-related Violence Manual”, containing “explanations” for such criminal behaviour, which allude to a “patriarchal universal structure”, and “culture-specific behaviour” (“hedersrelaterat våld som en kulturspecifik företeelse”). How this material manages to make its way to the public domain is beyond the author’s comprehension. It is after all illegal to publicly vilify men on the basis of their ethnicity, with no regard for the data that proves you wrong. 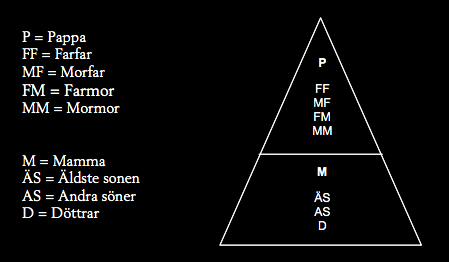 De Noli also cites a “research” project (equally unsupported by statistical analysis) which concludes: “Therefore we see a need to critically question also the presence in Sweden of conservative men as for instance from the Middle-East”. It is signed by Jur dr Jenny Westerstrand, research partner of Theology Dr and Professor Eva Lundgren, and approved by the Theology Association of Uppsala, despite violations of the guidelines for research and ethics with humans in Sweden.

“A particular flagrant propagation of cultural-racist notions is the one popping up in an official site by the Government of Sweden. The site “Men’s violence against women” (Mäns våld mot kvinnor) focuses in describing the government program set up to deal with that problem.”

It’s a small world Kristinn, and I couldn’t join the dots better for you than Noli:

“At the end the gender ideology of Christian brotherhoods, of the Bodströms & Borgströms and Assange accusers by proxy, of radical feminist politicians like Margareta Winberg and associate von Wachenfeldt, of their Christian theology doctors and demon exorcists Eva Lundgren and associate Jenny Westerstrand, all of their fantasy was finally made Swedish State-feminist law with the help of falsified data. [12]

And when their victory relaxed and the secret no longer was held, it confessed that gender perspective meant only feminist perspective. And then [it was empirically] revealed that feminist perspective meant gender supremacy. And finally, when truth spoke through reality, it demonstrated that Swedish state-feminism had evolved into purely cultural-racist, anti-Muslim propaganda. And it showed that one of its results  was the linking of “honour-violence” – ascribed with unrepresentative data to Muslim immigrant men – to the “terrorist war”. But this will not help legitimise the Swedish vassal military occupation of Muslim Afghanistan on behalf of the US and Lundin oil.

Should we conclude that Julian Assange and Muslim men resident in Sweden are but collateral damage, and that the more slippery target is oil? It’s clear Wikileaks are not attacking Sweden or the Swedish people, but someone ought to look into assuring that journalism and “research ethics reviews” in Sweden are both based on fact and compatible with scientific research, lest the world be spun off its axis…

Artist, musician, nerd
View all posts by CaTⓋ →
This entry was posted in EDITORIAL and tagged Expressen, Kristinn Hrafnsson, Wikileaks. Bookmark the permalink.