DID YOU HAVE ANY IDEA? with Gail MALONE, Peace Activist

Posted on April 13, 2012 by CaTⓋ
I saw a photo of Christine Assange protesting outside of Julia Gillard’s office – a solitary mother with her sign… I was so impressed. Then the opportunity came to take the bus to Canberra. I knew I had to be there. I had to support her in her efforts to save her son from being extradited. It was a privilege to carry that same sign with her up to Parliament House. To me it was a noble cause. We must save Julian Assange.
-
I’d followed the rise of Wikileaks and watch the enigmatic and apparently reclusive Julian Assange become a more public figure. Like most people, I was horrified by the “Collateral Murder” video, even though I wasn’t naive to the ways of war.
-
I attended a rally at Sydney Town Hall to protest the incarceration of Julian Assange, quite outraged at our government’s lack of assistance to him and the obvious political interference that was involved.
-
On the following New Year’s Day, I was involved in the first Global Day of Listening with the Afghan Youth Peace Volunteers. Connections are made across the world, to enable us in the privileged West to speak to young people in war-torn Afghanistan via Skype.
-
When we started speaking I told them I was Australian. I could hear the buzz of excited chatter:
“Oh Wikileaks! Julian Assange!” stood out among their native tongue. My heart rose. Wow. My eyes welled… I’d felt nothing but shame at being Australian, as far as our foreign policy was concerned regarding Afghanistan. These young people from the far reaches of Afghanistan loved Julian Assange.
-
At that moment I fully comprehended the enormity and importance of Wikileaks for those who seek peace through truth. I was proud to have Julian Assange a fellow countryman and can’t understand those that aren’t.
- 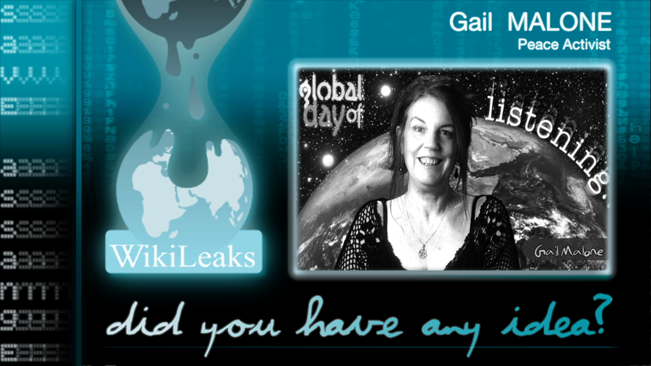 DID YOU HAVE ANY IDEA? with Gail MALONE, Peace Activist

-
After this day, I wrote an article for my local rag about the Day of Listening. During the research, I learned of Task Force 373, US based assassination squad, traveling Afghanistan, killing more often than capturing people. I learned of the shocking civilian death toll that drones were inflicting on the people of Waziristan, and that their own government allowed these strikes. I learned that the US company Dyncorp was involved in pedophilia in Afghanistan. I learned these things because of Wikileaks.
-
In June I attended an Act for Peace seminar on cluster munitions. I met Seraj Habib. He’d lost both his legs at the age of 10 – to a cluster bomb. We heard from John Ramstedt, Nobel Peace laureate and photo journalist; of Australia’s unconscionable behind-the-scenes lobbying for the US, encouraging (or probably pressuring) other countries not to sign the convention. To their shame, Vietnam was one of these countries. This was known because of Wikileaks.
-
Last week, I took part in what now has become Global Days of Listening – a monthly occurrence – and I spoke with Kathy Kelly of Voices in the Wilderness and Dr Hakim, the mentor of the Afghan Youth Peace Volunteers. We spoke of the Occupy movement and the phone link-up from Melbourne Occupy with the Afghan Youth, who are very pro-Occupy… I spoke with them of attending the rally in Canberra with Christine Assange to protest the incredible position Julian Assange has found himself in because of the machinations of the US government.
-
Hakim told me a story of one of his boys. He said he asked him what he wanted to be when he grew up. The boy replied: “A journalist”, and Hakim asked him: “What type of journalist?.” “A journalist like Julian Assange!”, he replied. Hakim wanted me to let Christine know.
-
We all need to work any way we know how, to save Julian Assange. It is now or never for Julian. History will judge him far more kindly than it judges our government.

One Response to DID YOU HAVE ANY IDEA? with Gail MALONE, Peace Activist