CITIZENFOUR – The Story of Edward Snowden

CITIZENFOUR (the Edward Snowden story) screened in Sydney this evening, ahead of its release in Australian cinemas on February 12th. What an amazing film. Yeah, it’s a documentary, but it felt more like a spy-thriller from the edge of my seat. As the film unfolds, the (real-life) revelations about global surveillance are of red-pill proportions – both on and off-screen – and change forever your perceptions of the world we live in, even when you’ve been interested in this area for some time. Take Glenn Greenwald’s reaction, for example. No spoilers, except to say that Big Data is watching you.

The avant premiere and Q&A was presented by Senator Scott Ludlam, our strongest parliamentary voice in Australia against the Surveillance State. He was questioned at length by the Aussie audience, about recent plans by our right-wing government to introduce mandatory data retention for all Australians. Of course we suspect that the reason for doing this is more about business than security, and after seeing CITIZENFOUR, it’s clear that the NSA, a partner of our spooks in the Five Eyes intelligence alliance, has got us all under their eye already. Our boys can tap into that dragnet, for genuine National Security reasons. But the NSA too collects a lot of information that doesn’t assist national security. 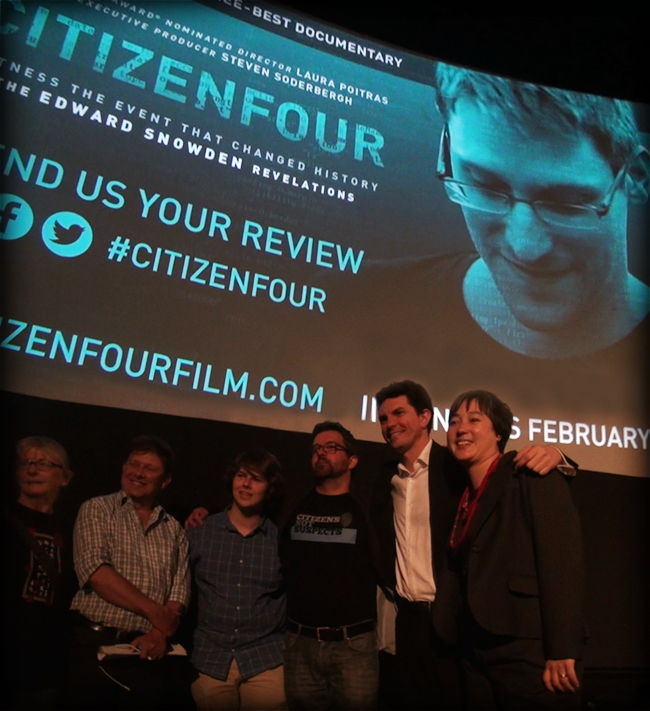 Senator Ludlam’s remarks this week in parliament, suggested that the government’s version of Mandatory Data Retention is a pretty ineffective tool of surveillance, since it doesn’t capture data from offshore mail services, like Gmail. Nor does it retain online chat, on platforms such as Facebook. But it is good for driving us away from Australian ISPs (Internet Server Providers), and catching people who illegally download copyright material.

The package is stamped ‘National Security’, but the contents monitor consumers; not terrorists. And this tool serves to police legislation that relates to the Trans Pacific Partnership Agreement (TPP). There is a clause that more or less obliges the governments of member States to protect each other’s corporate interests. In fact governments can be sued by overseas business entities, if they are seen to legislate in a way that harms trade.

We must see of great significance, concurrent moves to make copyright violation no longer a civil, but criminal matter. That would mean that our government would have to pursue breaches, rather than an individual plainiff, as has always been the case. In the longer term, metadata retention may be used to monitor and restrict what we buy online, especially if a foreign corporation in a member state claims that our choice – of pharmaceuticals, for example – harms their business. Word is, that US business entities actually write the legislation you need to join the TPP, and USG rubber stamps that, before passing it on to applicants.

Scott Ludlam will be talking in more detail about these issues on Thursday evening at another Sydney event, Politics in the Pub, in a session entitled ‘The Meaning of Metadata’. Joining him for an explosive expose and one-hour Q&A, will be National Security journalist and ex foreign affairs policy advisor, Dr Philip Dorling; as well as Samantha Castro, former spokesperson and National Council member of the Wikileaks Party and co-founder of WACA (the Whistleblowers, Activists and Citizens Alliance). The event will be viewable on the Politics in the Pub website on February 7th. 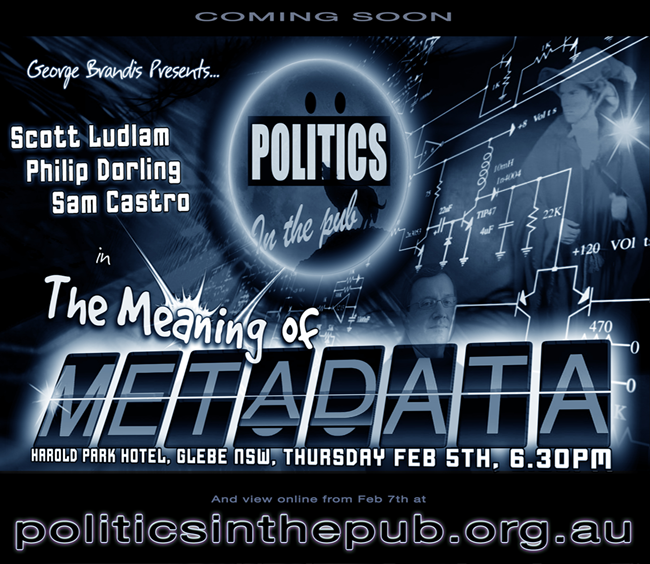