Today Guantanamo Detention Centre is 13 years old, and I just finished making a clip for The Justice Campaign called ‘Guantanamo Blues’. Produced by Dr Aloysia Brooks, wife of the ex-detainee David Hicks, it features the art of Molly Crabapple and the music of Les Thomas.

During a visit to Guantanamo, Molly did a number of portraits of men who had not been charged with any crime. Most of the 127 prisoners have been cleared for release – some, years ago – but they are still malingering there in conditions that amount to torture. According to a recent talk by David Hicks, most would be incapable of functioning independently again as human beings.

The song was written to raise awareness about the ongoing situation of those detained in the facility. ‘Guantanamo Blues’ songwriter, Les Thomas said:

“It is important that President Obama is aware that people from all over the world are counting on him to adhere to his promise to close Guantanamo and ensure fair trials.” 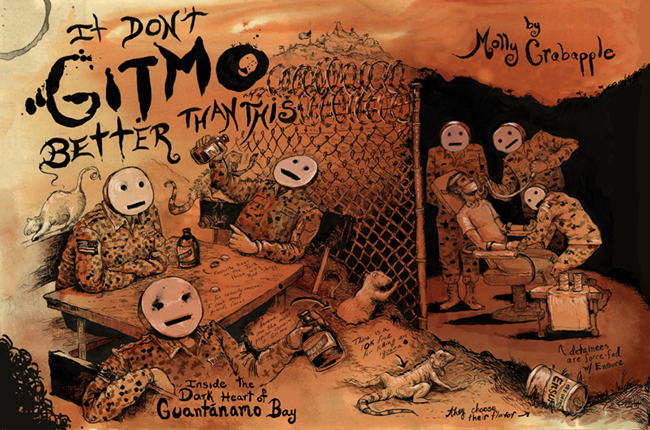 An unknown number of men are participating in a hunger-strike to protest their ongoing detention without charge or trial, and their conditions and treatment. Upon the release of the summary of the US Senate Committee Report on the CIA torture program, there is a renewed call for the Obama administration to hold those who orchestrated the torture program to account. One of the most disturbing revelations is that it was largely futile, and almost never produced any actionable intelligence. Hina Shamsi, Director of ACLU’s National Security Articulate Projectspace, commented:

“[JTF-GTMO assessments] are one-sided assessments that are full of uncorroborated information, information obtained through torture, speculation, errors, and allegations that have demonstrably been proven false.”

NB Quite by accident, we included a drawing by Steve Mumford – ‘Sgt Trisha Pinczes Reading by Camp X-Ray Disused since 2002, Guantanamo Bay, Cuba’ – believing it to be one of Molly’s. We are currently trying to contact him for permission to leave it in. Steve, if you’re reading this, please drop me a line at EDITIONS@THING2THING.COM.