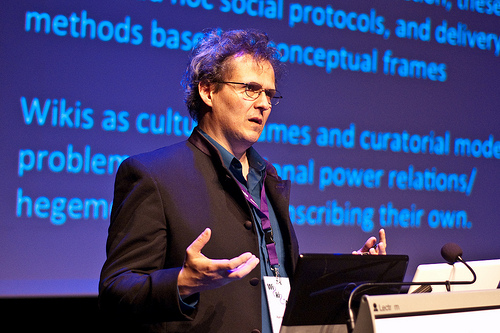 With the bleeding of information from the material to the infomatic rhizome through Wikileaks (i.e. the US diplomatic cable leaks), the Infostate has created an asymmetrical insurgency against conventional power. Negri’s conception of cognitive capital as locus of power asymmetrically challenges that of material capital. This is analogous to previous mention of events as told in the movie, The Matrix, where the artificial (informatic) being overrides/supercedes embodied conventional power.

As Deleuze, then Agamben assert that power is the separation of the subject from potentiality, and as such mitigates dissent, the nation-state is trying to exert power by separating the means of support and the figurehead from Wikileaks, but distributed, asymmetrical cyberwarfare by the net.community has already disrupted banks, credit, and networked sites. It has even awakened the amorphous hacker subculture of “Anonymous” which was last known for its mass protests against the Church of Scientology to rise against the opponents of Wikileaks. The Net, as child of the military (conventional power) has begun to turn on its masters, with expected reflexive responses.

One Response to Digital Anarchy and Wikileaks