ADDRESS TO THE PEOPLE OF THE USA by Kellie Tranter

[full transcript with links below]

Kellie Tranter is an Australian lawyer and human rights activist who stood as an Independent candidate for the NSW Parliament with an unsolicited endorsement of her candidature by anti-corruption fighter John Hatton AO.

She has delivered addresses, chaired workshops and participated in public debates on issues like climate change, human rights and gender equality at local, national and international conferences, including speeches opposing unjustified wars and economic exploitation. She has held office with BPW International and her activism has been acknowledged by the Women’s Electoral Lobby.

Kellie regularly contributes political and social commentary to public affairs websites like ABC’s The Drum, National Times and Online Opinion and has written for New Matilda and the Australia Institute.

To the people of the United State of America

In about four months time many of you will cast your vote in the Presidential election. Many Americans – like many Australians – have grown weary of a political system that has allowed two major political parties to hollow out our respective democracies, and then elope with lobbyists, multi–national corporations and corrupt and manipulative financial institutions.

We may delude ourselves that casting a vote will make a difference, but that alone cannot and will not change the mindset of our elected representatives or those who fund and influence them.

As you struggle to keep your jobs and pay your bills and provide for your families, it may be difficult to understand why citizens in Australia seek your indulgence to make the plight of Julian Assange, WikiLeaks and Bradley Manning an issue in your forthcoming election.

But if you care about civil liberties, about freedom of speech and the press, and about truth and democracy then I’m afraid that you, like us, have little choice. What is at stake here is democratic freedoms and justice; injustices, left unchecked, have a way of spreading from a few to the many, and the many include the common people of your country as well as mine.

Assange and Manning remind us all of the need to protect individual rights against the weight of a State. They remind us that we have a right to know, and that the means of information must be open and free.

We appreciate that many Americans may have had mixed feelings about Julian Assange following the release of the US diplomatic cables. With the Administration’s immediate outrage and your Vice President calling him a high tech terrorist and your media repeating calls for his assassination, that was perfectly understandable. But now that the dust has settled, let’s take a moment to reflect.

Do you remember, after the release of the Afghan War Diary, being told that Julian Assange and WikiLeaks “might already have on their hands the blood of some young soldier or that of an Afghan family”? And later finding out that the Pentagon had refused to help WikiLeaks redact the documents for harm minimisation purposes? And later your officials conceding that they had no evidence that the documents led to anyone’s death?

Remember being told that some of the individuals referred to in the cables were subsequently jailed, injured, or killed? And the later acknowledgment that it was often hard to show a direct causal link to the State Department cables, because many of the individuals who suffered were already under foreign government scrutiny?

Remember being told that WikiLeaks cables worsened US relations with Afghan President Karzai? Yet it was recently announced that Afghanistan had become a major non-NATO ally of the United States?

Remember being told that US diplomacy would be harmed? And later hearing the US State Department admit that the release of the cables was embarrassing but not damaging?

Do you remember Assange being accused of giving aid and comfort to terrorists who seek to destroy the United States? It’s not so long ago that thousands of Australian citizens stood here to peacefully protest against joining your government in the invasion of Iraq, only to be accused by our then Prime Minister John Howard of giving comfort to Saddam Hussein.

Accusations like these have plenty of historical precedent: Hermann Goering said at the Nuremburg Trials: “The people can always be brought to the bidding of the leaders. That is easy. All you have to do is tell them they are being attacked and denounce the pacifists for lack of patriotism and exposing the country to danger. It works the same way in any country.”

It was an American revolutionary, Patrick Henry, who said “The liberties of a people never were, nor ever will be, secure, when the transactions of their rulers may be concealed from them.” Julian Assange, and WikiLeaks and its sources, have done no more than expose the truth. The truth explains the pain and suffering and misery felt by innocent men, women and children around the world, it explains the antipathy other people in other countries feel towards the United States, and it explains why many American citizens feel betrayed by their own government. Yet these people brave enough to show the world the truth stand condemned, by your government and by mine.

Over the last 30 years particularly, Australia has become the de facto 51st state of your Union. The only matters and issues that receive unquestioning bipartisan support in this country’s parliament are all things Washington. Your Government’s foreign policy wishes become our necessities, and our leaders are too weak to resist. So much so that the cables revealed that our government was prepared to work secretly with your government to weaken a key international treaty to ban cluster bombs. You’ve seen or heard of the damage and injury cluster bombs can inflict; can you imagine the shame and disgust many of us felt upon learning that?

Our politicians tell us that your government is not interested in extraditing Assange to the United States; they say they don’t know what a sealed indictment is, and they deny knowledge of a secret grand jury. But they will never call Assange a journalist, because your Columbia University Graduate School of Journalism, and many Australian newspaper editors and our Walkley Foundation agree that his work is journalism that invokes First Amendment protection. Our politicians cravenly refuse to stand up for Assange and they try to hide behind carefully chosen words, no doubt partly in deference to your government’s wishes, but no doubt also because our government, like your government, would prefer to keep its grubby secrets from the public gaze.

The people of the United States of America have a proud tradition, shining brightly from the time of its Founding Fathers, of standing up against tyranny and fighting for liberty and justice. The citizens of the world, including the citizens of Australia, need the help of the American people to ensure that no government – including the Australian government and the United States government – tries to punish Assange or WikiLeaks for doing no more than publishing the truth, from lifting the veil of secrecy from sordid narratives and permitting the common person to see what government does in his or her name. We all have to stand up against this, and the principles can hardly be better expressed than they were by two of your own Presidents: John Adams, your second President, warned us that “The jaws of power always open to devour, and her arm is always stretched out, if possible, to destroy the freedom of thinking, speaking and writing”, and Abraham Lincoln later marked our obligation: “To sin by silence when they should protest makes cowards of men.”

I sincerely hope that all Americans will heed those great voices and not sin by silence, but stand in protest against this threat to our freedom. 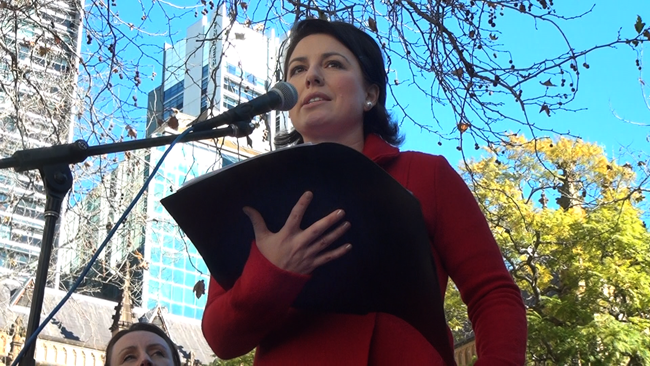