The most likely way out of Gitmo is to die…

What is this hell we call Gitmo? Whose idea was it to detain people there indefinitely without charges? Why can’t even the President of the United States find a way to resolve the plight of at least the 86 men who have been cleared for “immediate” release but are still stuck in the detention camp? What, or who is causing the inertia?

Why is Obama suggesting it’s Congress, when there is a clause in the National Defence Authorisation Act (NDAA) that permits him, as the Commander in Chief, to fulfil the promise he made repeatedly during his 2008 campaign, to shut down this appalling violation of human rights? What has Obama really done to close, or not close Guantanamo?

For those who haven’t been aware of what Gitmo is like, consult The Justice Campaign, the Freedom of The Press Foundation and of course Wikileaks.

In a recent press conference about Guantanamo detainees, 106 of whom have been on a hunger strike for over 100 days now, Barrack Obama did nothing more than deplore the fact that the Guantanamo Bay Detention Camp was located on foreign soil; announce that he had asked Congress to transfer the prisoners to the US; and say that he was lifting the moratorium on the repatriation of Yemeni prisoners.

The President specified however that these men would not be released immediately, but subjected to a case by case investigation – presumably again, since they were already cleared. The President was understandably heckled by Code Pink’s Medea Benjamin, and in no uncertain terms, told to “get real”.

If the Gitmo transfer ever happens, one would hope for the rule of law to apply, eventually… But after 11 years of unjust detainment, deprivation and torture, most of Obama’s captives have had it, and have have opted for death by starvation. It is after all, the most likely way now to exit Guantanamo.

To prevent this mass exodus in body bags however, the prisoners are being force-fed on a round the clock regime. It would seem that the US will not even let these men die in dignity…

A small group of us attended the US Consulate in Sydney in solidarity with those on hunger strike and the international day of action to close Guantanamo Bay. 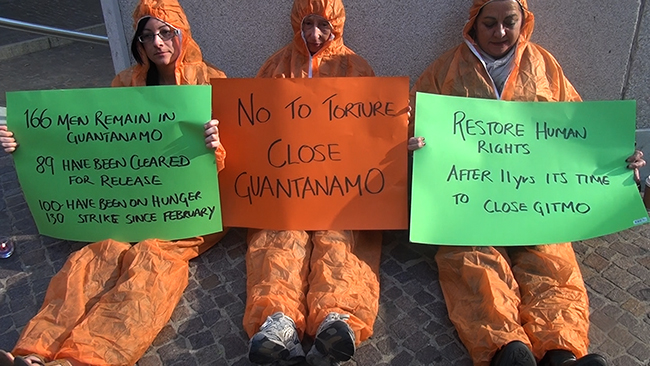 Force-feeding is the ultimate tyranny, for those who only want to give up and die