SPIES IN THE SKIES – Wars Crimes Alert for Australia

There’s only one kind of privacy we really need to be concerned about; that of those who most invade ours. Intelligence Agencies, for example.

What they get up to here in Australia, not even a Senator may know, nor hold to account.

Our Intelligence Facility at Pine Gap is jointly run, and shares its SIGINT (signals intelligence) with another nation: the US. It’s supposed to be an open exchange, not only with the US, but other countries that form the 5 Eyes group: Canada, the UK and New Zealand. But history has shown that exchange to be uneven in nature, with the US Executive ultimately deciding what information will be shared. By contrast, our Prime Ministers have never been allowed to enter the building at Pine Gap.

One ex Prime Minister however, Malcolm Fraser, has recently declared that we may have a serious problem with that situation, and warns that we may be charged for war crimes:

“Initially Pine Gap was [used for] collecting information … it’s now targeting weapons systems, and very much involved in the targeting of drones… Americans involved in those programs are given legal cover under the War Powers Resolution passed after 9/11, which gives totally unlimited power, no geographic limits, no time limits, using any means available or that might become available to American presidents to do so. But that resolution gives no legal cover to Australians operating out of Pine Gap who are complicit in finding, identifying, and locating the so-called target.”

Mr Fraser’s warning followed a week-long Peace Convergence in Canberra, involving a world-record breaking series of protests – 28 in one day by WACA [the Australian Whistleblowers, Activists & Citizen Alliance] – that spanned across weapons manufacturers, embassies, government departments, military bases and Intelligence organisations. There were also a few private companies on the list, who profit well from invading our privacy and serving the US’s corporate war machine. 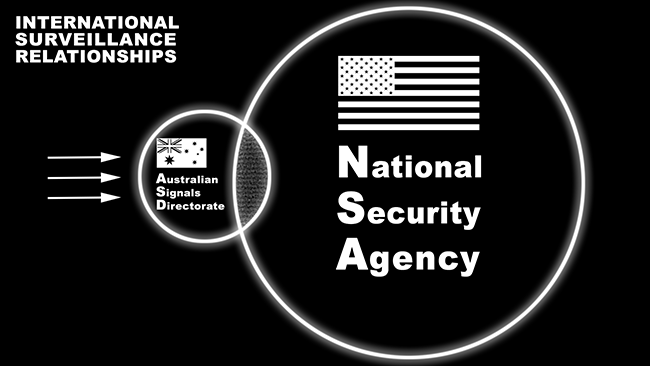 The Australian Signals Directorate is basically a spy outpost for America’s National Security Agency [NSA], as revealed through whistleblower Edward Snowden’s leaks. The ASD are heavily involved in the PRISM and the XKeyscore surveillance programs. PRISM is a top-secret $20m-a-year NSA surveillance program, offering the agency access to information on its targets from the servers of some of the USA’s biggest technology and social media companies: Google, Apple, Microsoft, Facebook, AOL, PalTalk and Yahoo. The UK’s spy agency GCHQ, also has access to PRISM data.

The NSA receives intelligence from four key facilities in Australia that are part of the XKeyscore program. They include the jointly controlled Pine Gap base near Alice Springs, and the Australian Signals Directorate’s intercept stations located outside Geraldton in Western Australia; at Shoal Bay near Darwin, and in a new centre at HMAS Harman Navy base in Canberra. Some say that NSA means “Never Say Anything”, and somewhat ironically, it was born of a desire from the Pentagon to: “expand its worldwide communications network” and establish a ”Global Information Grid”, according to a Dept. of Defence report. 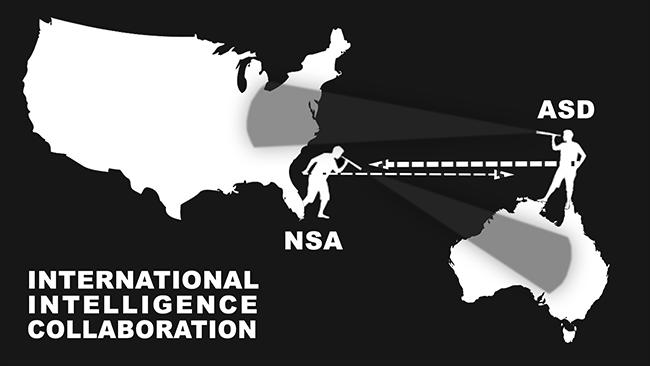 The NSA’s computing Cloud is the Utah Data Centre, a 1 million square foot Data Collection Centre that opened September 2013, under the auspices of Operation Stellar Wind, to intercept, decipher, analyse, and store vast swaths of the world’s communications, from satellites, underground and undersea cables of international, foreign, and domestic networks. These are near-bottomless databases collecting all forms of communication, including the complete contents of private emails, cell phone calls, and Google searches, as well as all sorts of personal data trails, such as your parking receipts, travel itineraries, bookstore purchases, and other digital ‘pocket litter’.

As well as your confidential personal communications, the centre also grabs financial information, stock transactions, business deals, foreign military and diplomatic secrets and legal documents – all of which are heavily encrypted of course. But the NSA can break unfathomably complex encryption systems employed by not only governments around the world but also business rivals and many average computer users. 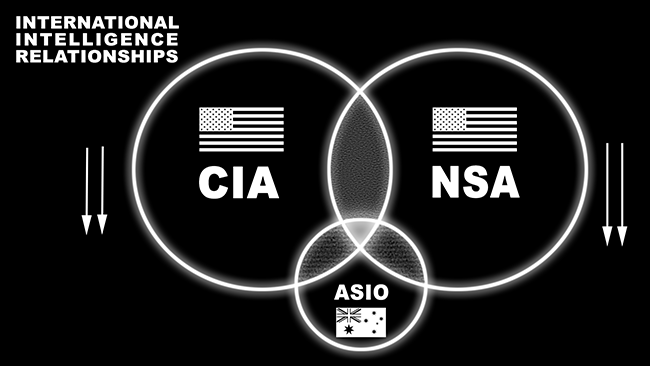 “The internet has been turned into a Militarily Occupied State. When all of our private communications; heart-felt; the inner core of our life – communications between boyfriends and girlfriends; between husbands and wives; sons and daughters; between business partners; even between bureaucracies and States… when all of those communications are swept up; hoovered up, into a vast collection apparatus, indexed and stored for all time, available only to a select few; then we are in the situation where we have a tank on the streets of the inner core of our lives, where we have a soldier under our bed; listening to everything that a husband and wife say to each other, when they are communicating on email or SMS. The penetration of the digital of civilian life, is also the penetration of the military of civilian life.”