Australian citizens are calling for urgent public support from around the world to send a boat full of journalists and observers out to report on what the Australian Government are doing with asylum seekers at sea. The Abbott government, which may be in breach of international law, has become increasingly secretive over the last year regarding its extreme measures to “Stop the Boats” – a hard-line Border Protection policy that won it the last election, but which has seen it fail to protect the lives of asylum seekers.

The eruption of violence in a detainment facility on Manus Island in Papua New Guinea, earlier this year, saw scores of detainees injured by hostile locals, and one man, Reza Berati, beaten to death by staff. Instances of self-harm and attempted suicide among stir-crazy detainees have become alarmingly wide-spread, and mothers of young children on Christmas Island recently announced a suicide pact, in order for their young to be allowed to stay in Australia.

The reaction however from the Abbott government has remained pitiless and grossly insensitive. Besides implementing ongoing Protection of Injury surveillance, it has denounced the intended mass suicide as “emotional blackmail”. 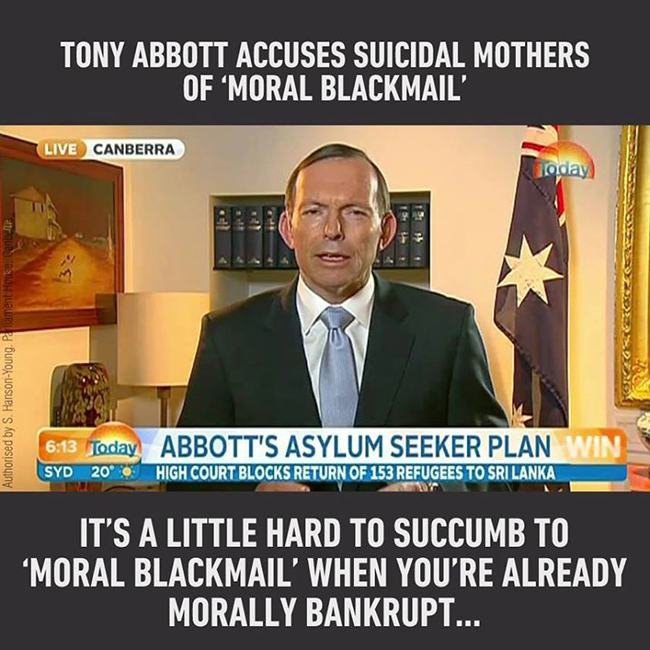 Over the last few months, on-shore detention facilities have been emptied, despite robust protest from concerned Australian citizens, and the detainees whisked off to remote locations where it is difficult for them to have access to legal representation, whose funding in any case has been cut. The ‘policy’ is ostensibly to do nothing with refugees, besides letting them rot in perpetuity in places where Australians are likely to forget about them.

A recently leaked video address to asylum seekers by Immigration Minister Scott Morrison reveals him saying that they will spend “a very long time” in detention, even if deemed to be genuine refugees, and never settled in Australia. These measures have been seen as coercive, to get asylum seekers to opt for returning to their country of origin, rather than facing what may be a life-time of incarceration.

Off-shore detention was implemented by the previous Labor government, and already harsh and seemingly endless, but in a bid to halt the arrival of asylum seeker boats completely, the Liberals mounted a quasi military Operation (Sovereign Borders) to block their passage, and stipulated that these “illegals” would never be admitted to Australia, even if found to be genuine refugees. Their fate would be ‘indefinite’ detention in off-shore camps, in tortuous limbo, while the government ‘processed’ them. 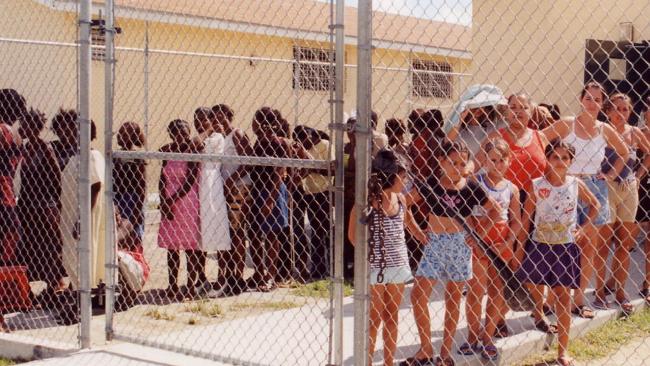 TOO YOUNG TO HOLD: Victorian Legal Aid argues that the original decision to detain four children on Christmas Island was made unlawfully. Picture: AP

An Australian Customs vessel intercepted two boats last week in its “contiguous zone” – not territorial waters – a zone that is not yet Australia, and where right of “innocent passage” should normally apply. One boat contained 41 asylum seekers and the other 153, reportedly all Tamils who were fleeing persecution in Sri Lanka. Citizens, organisations and governments around the world looked on in shock, as the Australian government handed over all 41 asylum seekers on the first boat to the Sri Lanka authorities.

An injunction has now been placed by the Australian High Court – see live updates provided by The Guardian – to prevent further refoulement of the 153 refugees on the second boat. There appears to be doubt that the government’s radical new practice of “enhanced screening” – four questions only, that resulted in 100% negative outcomes for the 41 people – constitutes fair consideration of an asylum-seeker’s’ case. 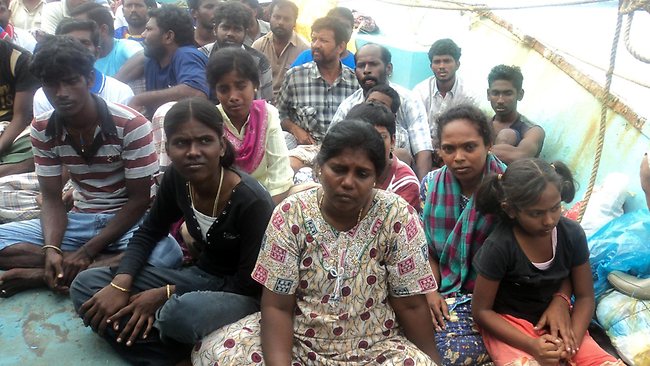 Sri Lankan asylum seekers sit on the deck of their boat stranded on the water in Pagai Selatan, Mentawai Islands, Indonesia. Picture: AP

Although the interception of these fleeing boatloads happened outside Australian territorial waters, the “prison ship” has now absconded, pirate-fashion, to the high seas. And it would seem that there are legal implications associated with both locations. The government’s legal representative, Gleeson QC, is claiming that since the the asylum seekers were picked up outside of Australia, they can not be afforded protection under the Migration Act. On the other hand, It is also illegal for a government to detain people without disclosing their whereabouts – *somewhere* on the high seas. Refoulement (delivery of refugees to their persecutors) is a violation of international law, and it breaches Australia’s obligations under the Refugee Convention, and of course asylum seekers have the right to fair screening and protection from harm in the interim.

Former liberal candidate, Mark Hoysted, outlines some of the key issues before the court.

listen to ‘Mark Hoysted’ on Audioboo

The High Court has specified that although none of the 153 asylum seekers can be delivered to Sri Lankan authorities, pending an investigation, they may be transported elsewhere to be processed. Manus Island and Nauru are not looking like the easiest of destinations at the moment, given certain conditions of Maritime Powers Act, but it is unlikely that our government will cede to motions being led by Senator Sarah Hanson Young and human rights groups such as Plan International Australia who are particularly concerned about the children on board, to bring these people to Australia. For the moment, all we know is that they are being detained on the high seas, with conditions aboard unknown. 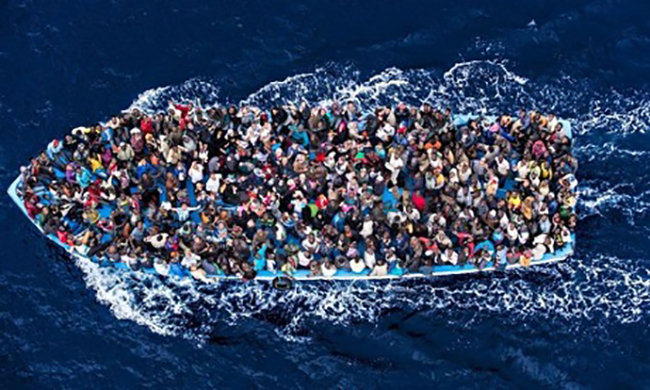 This government needs to be placed under maximum surveillance! Its employees are unlikely to speak out, since they have been threatened with dismissal if they disclose or criticise the government’s “Operational Matters” – a term that has been employed by Prime Minister Abbott to characterise the battle against refugees as a war. It therefore falls upon ordinary citizens and independent journalists to expose the human rights atrocity this government’s actions appear to have become. Please support Operation Transparent Borders by donating generously. 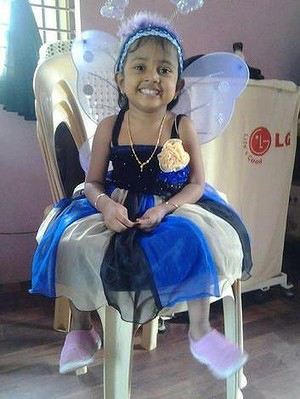 listen to ‘Sarah Hanson-Young’ on Audioboo