After being suitably impressed with recent emissions, I looked more deeply into thejuicemedia’s Channel on YouTube. The off-beat, musical, current affairs series they call Juice Media News, is written and created by Hugo Farrant (in the role of Rap News anchorman, Robert Foster) and Giordano Nanni, and it is HOT PROPERTY. Too hot perhaps… operating as it does from a tin-shed / home-studio / backyard in the suburbs of Melbourne. Nevertheless, in just over a year the channel of these little Aussie bleeders has risen to the level of #7 – Most Subscribed (All Time) – Reporters – Australia on YouTube. 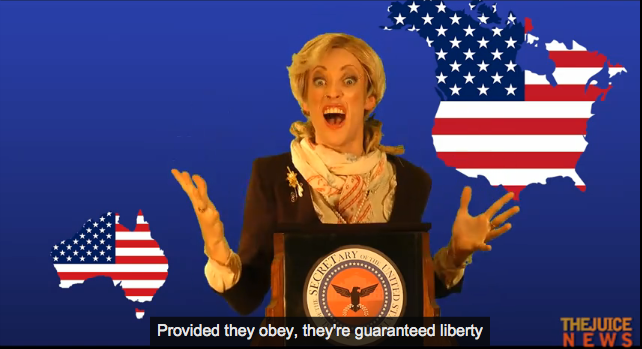 Their latest: “RAP NEWS 6 – Wikileaks’ Cablegate: the truth is out there” is approaching 1000000 views since it was posted on December 17th. One might wonder if the Berlusconi offer to buy their show is not such a “Hillaryous” idea… but their reply is clear: “Sorry, Silvio, we have scruples, it’s not for sale”.

Making a surprise appearance and rapping himself in “RAP NEWS 5: News World Order – the war on journalism” is Julian Assange (described by one viewer as ”sexy as fuck”).  The mutual respect continues, with “Rap News 6…” being embedded on the Wikileaks web site. 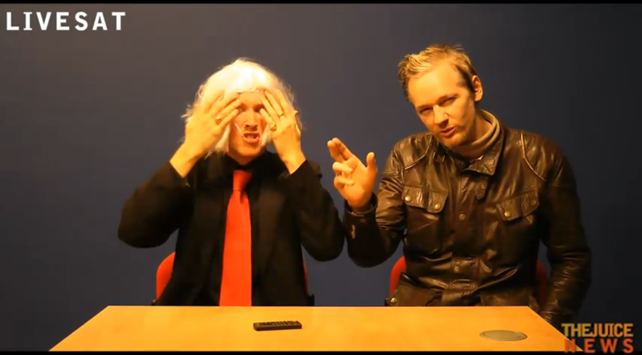 No wonder the large number of views… but we’ve also seen a remarkable rise in production values since Ep. 1, and much richer musical arrangements emerge. Some say Eminem meets Jon Stewart, but I’m sure I caught a flicker of Zappa. Farrant’s performance too improves as he slips more assertively into his characters (at times with chilling verisimilitude). The well-constructed (rhyming) discourse and rib-grinding humour rounds it off to create something that is truly worth watching.

Amidst scores of rave reviews, Ozsoapbox expresses its admiration for the team’s “strengths of linking current events, heavy-hitting intelligent lyrics and entertaining visuals together in a single broadcast of pure win.” Hell yeah!

These guys are deadly funny, talented and potently articulate. With Indigenous affairs high on their agenda, they are developing a very interesting slant on the notion of colonisation. Be sure not to miss the extensive “About Me” and wish the boys all the bandwidth they deserve.