Tensions grow again in Gaza with Israeli official reports of “attack tunnels” being repaired by Hamas, and calls for EU troop deployment in the region. Countless tunnels have been dug under Gaza, often with bare hands, to smuggle food, medicine, gas, building materials and other items, all of which remain scarce since the enclave was “put on a diet”.

Water too, of the drinking variety, has been in direly short supply, with access limited to a few hours a week. That there has been a long-term need for “smuggling tunnels” is supported by the medical reports of Norwegian doctor Mads Gilbert, who noted back in 2009 that one child in three had stunted growth, due to prolonged malnutrition and starvation. He stated:

“As a result of the Israeli siege, there has been widespread development of anaemia among children and women due to malnutrition as a result of siege and poverty. Stunting, where a child is more than two standard deviations shorter than what it should be, is sharply on the rise. In 2006, around 13.5 percent of children were stunted. In 2009, 31.4 percent under age two were stunted.

In other words, every third child is less developed than he or she should be. And stunting does not only affect growth. It also affects brain development and the ability to learn. This is a direct consequence of malnutrition.

Remember, this is not caused by drought or natural disasters, but a deliberate, man-made lack of food and water, imposed, planned, and executed in the most detailed way by the Israeli government. They even calculate how many calories to let in to Gaza to avoid outright starvation, but to “just” cause malnutrition since that goes under the radar of human rights abuses.” 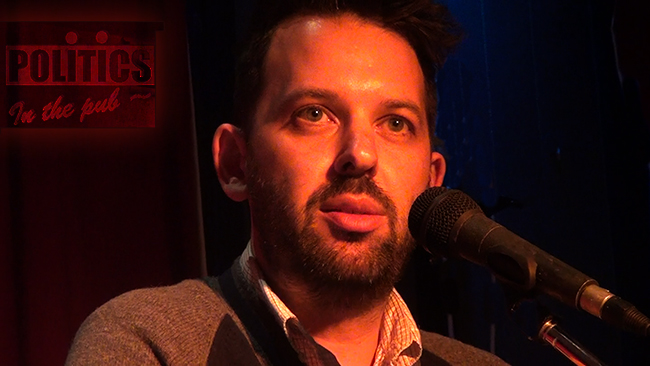 Antony Loewenstein on Gaza at Politics in the Pub

According to Antony Loewenstein, in a recent talk at ‘Politics in the Pub’ in Sydney, and Noam Chomsky on numerous occasions, liberal Zionists and the younger generation have become increasingly uncomfortable with the actions of the Israeli State and its US backers.

Artist, musician, nerd
View all posts by CaTⓋ →
This entry was posted in ACADEMIC, EDITORIAL, NEWS and tagged Antony Loewenstein, Gaza, Politics in the Pub. Bookmark the permalink.