It was roaring at the Sydney Town Hall yesterday as Labor and Greens politicians united with media personalities to say no to the Abbott government’s crippling financial attack on the ABC. This comes after a litany of protests from our climate change denying, refugee punishing right-wing government, claiming that the channel was, as one hashtag described it, a…

Tanya Plibersek, Member for Sydney and Deputy Leader of the Opposition reminded us that Tony Abbott said: “No cuts to the ABC”, the night before he was elected. Word had it however, that as punishment for being too left-leaning – showing asylum seekers’ burnt hands, for example – the damage was going to be around $50 million. Plibersek now assures us that we can add a zero…

“These are real people doing valuable work, telling Australian stories. They deserve their jobs to be protected, and I know that all of you will SUPPORT THE MEAA, THE CPSU, THE STAFF ASSOCIATION AND ALL THOSE OTHER ASSOCIATIONS FIGHTING TO PROTECT THESE JOBS AND YOUR ABC.”

The Minister for Communications, Malcolm Turnbull has denied that the cuts – half a billion dollars and ramping up, according to Senator Ludlam, over the next 5 years – will impact upon programming. The reality is that ABC South Australia will be closing its doors soon, and we have already had ‘Stateline’ axed, along with its Walkley award-winning journalist Quentin Dempster.

Dempster opened his speech with an acknowledgement of wide-spectrum support for the ABC:

“Those of us who are about to be industrially executed are buoyed by your solidarity. I thank the Media & Arts Alliance; the Community Public Sector Union; the Friends of the ABC; GetUp; Jonathan Holmes; and our professional colleagues, friends and allies throughout the Australian Media Industry – including commercial television and radio; the now many online news, conversation and analysis websites; the print media, including Fairfax; and our closet supporters in News Limited.”

Michael Tull of the CPSU distinguishes our national broadcaster from its US counterpart by way of its principled dissociation from commerce and corporate ownership. Therein he says, lies the force of its of checks and balances. Tull thinks that an attack on our ABC’s capacity to report independent news is an attack on our democracy. Rightly so, if only compliant media is to be heard in the future, and little of what the government wants silenced… The penalty of 10 years jail for journalism has already been set.

Actor Geoff Morrell makes it clear that this is about the Australian stories that will not be told; the programs that will not be made; and the talent that will never get a chance. It is a looming nullification of the arts and local culture, and most disturbingly, on regional news, most of which is only reported by the ABC.

But as most of the speakers pointed out, the ABC belongs to the Australian people… and they pay for it! Constitutionally, they would have to be on a winner if they stood by the firm recommendations of their broadcaster, regarding how their much-loved, and much needed services can be maintained. 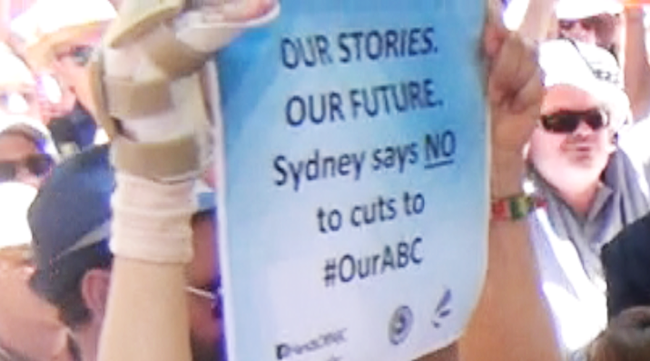 The rally was as joyous and determined as it was mournful and nostalgic, but there was one exquisite moment. After the president of the Media and Entertainment Arts Alliance (MEAA) – Australian entertainer Patricia Amphlett (Little Pattie) – reminded us of a song she had once sung, she asked:


“What Gough would say…”

Old man, the timing was perfect. We will maintain the rage and the enthusiasm!
NO IFS… NO BUTS… NO ABC CUTS!

Artist, musician, nerd
View all posts by CaTⓋ →
This entry was posted in EDITORIAL, LIVING PROOF, NEWS. Bookmark the permalink.