Senator Scott Ludlam is back! with another viral video addressing Australia’s Prime Minister, Tony “Dum Dum” Abbott. Aussies were wowed by Ludlam’s fiery “Welcome to Western Australia” speech, in anticipation of Abbott’s visit to WA earlier this year. The speech got close to a million views within days, and Ludlam is indeed widely followed and cited by Australians across social media. So why all the politicians leave the Senate when Ludlam speaks is a mystery. Could it be as simple as Metadataphobia?

“The G20 Summit is happening and the leaders of the wealthiest nations on the planet are converging on Australia to come and learn directly at the feet of the master of fascist dystopian fuckwittery: Tony Abbott. Join the noble Australian Prime Minister as he lists his recent achievements and launches the opening of the G20 Summit in Australia, backed by a faithful and compliant mainstream media, represented by our favourite local correspondent Ken Oathcarn.

This episode features a magical cameo from Wizard Senator Scott Ludlam, who has been campaigning tirelessly in speeches to empty Senate rooms to stop the Government’s proposed mandatory data retention laws – coming up soon for a vote in the Senate. After this G20 episode, no one will be in any doubt why Australia is leading the civilised world in the global race to towards 1984.” 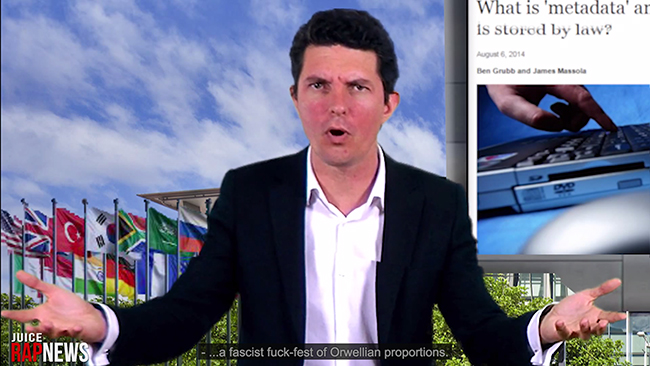 Special thanks to Scott Ludlam for working on this video, and for all his tireless work to fend off the forces of Mordor.