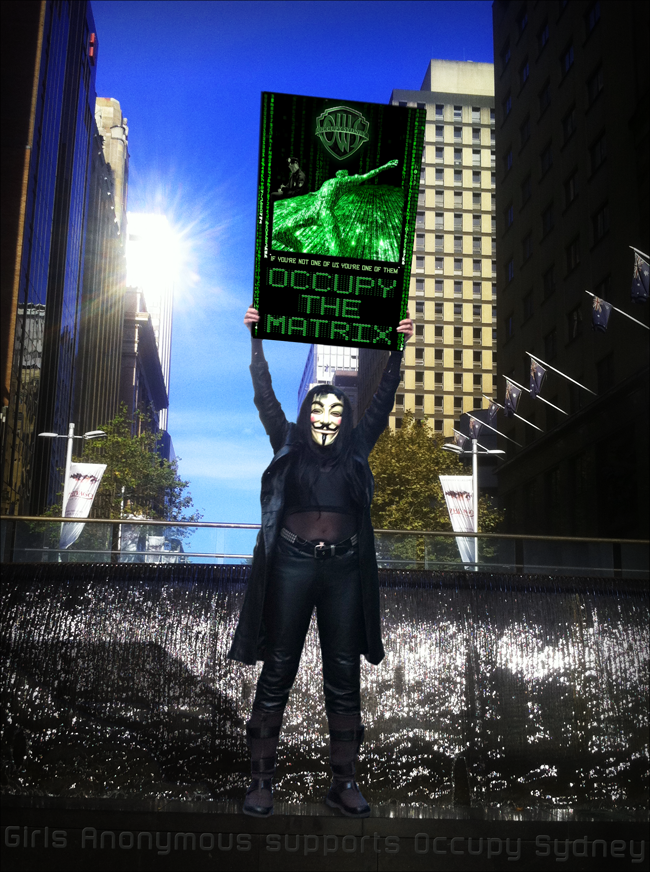 What I discovered from today’s experience (1st day for me, out of The Matrix…) is that Sydney-siders love Anonymous – even the passers-by, who wanted to be photographed with… but had to carry the sign… to relieve my shaking arms…

Overall, it felt like the first time I went diving: totally new world. Men talked to me as if I were a MAN! (the moustache?) and young people adressed me as if I were of their age group (amazing to see one’s own prejudicial appearance disappear).

Everyone was incredibly OPEN when they told me about their situations, and respect was in the air. I discovered that Anonymous was seen as a lone and wise citizen, a protector of the little guy, as Americans call it.

I intend to go back, not so anonymous, and lend a hand.

It goes without saying that we don’t have it nearly so bad here in Sydney as our brothers/sisters in the US, but let’s not forget that the roof over our head here is the most expensive in the world! I work close to 7 days a week – 13 hour days sometimes – “casually”, for various schools, and I STILL can’t afford my own place. MY STUDENTS however don’t share houses; they share ROOMS (4-to-a ), and some of them are suffering from malnutrition.