I’m speaking as a Peace Activist and representative of the Support Assange and WikiLeaks Coalition in Sydney. As a grass roots supporter, I hope my presence here will help to encourage others, who feel powerless in these troubled times to realize their potential and the necessity to use their voice. I’m no different to you, I have no public profile, I am a Grandmother, wanting to leave a better world for my grandchildren to grow in. You CAN foment change; grassroots action has always enabled it. Our fight is a numbers game, so every one of you, every last one of you is needed, you are important in the struggle for truth and transparency, don’t underestimate your power in our diminishing democracy, we may only have a small window of opportunity left for us to voice our opinions in freedom.

When we hear our Government officials spruiking the company line on Julian Assange, we need to realize they are not speaking to the informed. Their rhetoric is for the uninformed, or the misinformed, we can all help to counter their mischief by informing people of the facts readily found in the public domain. Thanks to freedom of information requests we know there is a document that outlines the pat replies to be used by our representatives when constituents ask tricky questions about Julian Assange, nice to know our representatives aren’t trusted to think for themselves. So be brave, because they’re not. Start conversations with friends, relatives and work mates; the truth is far too important to let it be denied us. You can also donate via wikileaks.org, Bendigo Bank or post a cheque to help them keep up their vital work.

This quote by Julian Assange, nutshells the reason for chain wars, where one is started up before the last one is out. “Looking at the enormous quantity and diversity of these military or intelligence apparatus insider documents, what I see is a vast sprawling estate in what we would traditionally call the Military Intelligence Complex or Military Industrial Complex. And this sprawling industrial estate is growing, becoming more and more secretive, becoming more and more uncontrolled. This is not a sophisticated conspiracy controlled at the top, this is a vast movement of self interest with thousands and thousands of players all working together and against each other to produce an end result which is Iraq and Afghanistan and Columbia, and keeping that going.”

Our taxes feed a war machine. This is what peace activists are up against.

Harking back to the title of this forum, it is interesting that Julian Assange was called a ‘high-tech terrorist’ by Vice President Joe Biden for, as Holly Tannen said: ‘conspiracy to commit journalism’, and informing us how our tax dollars pay for aggressive wars we have been and are currently involved in. According to Fred Burton of Stratfor: “Assange is going to make a nice bride in prison. Screw the terrorist. He’ll be eating cat food forever.” And taking bizarre to a new level, the 9/11 Coloring Book with terrorist trading cards featuring Julian Assange; I kid you not. Now, Julian Assange, WikiLeaks staff and supporters have been labeled ‘enemies of the state’. That’s you and I, folks. That’s something we should ask our Government to speak to the US about. Keeping this in mind, the mainstream media and Governments have a massive platform to disseminate their hubris. It is beholden on us to correct their tripe and today’s forum is part of that. Whenever we engage our politicians or members of the public, we need to affirm that Julian Assange is a journalist and editor-in-chief, and that WikiLeaks is a publishing press and media outlet. STATE IT!

Wikileaks publications - It's time to open the archives

.
We have access to a cache of documents that activists can use to fact check Government’s myth making, and counter them with the expansive source documents available to us through wikileaks.org. These documents enable us all to be our own journalists with access to information once deemed for their eyes only. WikiLeaks disclosures are source documents. I guarantee WikiLeaks will be studied in higher educational facilities long into the future; long after the current regime is gone both in the United States and at home. The Afghan and Iraq releases should be mandatory reading for those that blindly support the call to war with jingoistic nationalism. We need to understand the reality; we need to know Special Force’s assassination squads are kicking in doors of Afghan families in the dead of night, murdering women and children. We need to know the civilian death toll drones are inflicting on the long-suffering people of Waziristan. We need to know of the systematic torture that occurs seemingly with no checks, balances or international over-site in black op sites across the planet.

Without this information freely available to us, how is it is possible to understand what is in our national interest and done in our name? How can we possibly make informed decisions without the knowledge as to whether our allies comply with international law regarding war crimes, invasions, occupations and genocide? We have been told, by Nicola Roxon and Julia Gillard, that the release of war documents is dangerous. I ask them, more dangerous than war itself? This, among other statements by other senior government members, is ridiculous. The winds of war change rapidly and most documents are historical by the time of release. They are also carefully redacted. No harm has been caused to innocent people. The harm that is caused by WikiLeaks is to the integrity of governments and the valour of war. The West does not have a monopoly on democracy and human rights. The fact we are here today is testimony to that, and it is naive to believe otherwise given the wealth of evidence to the contrary. John Pilger said: “It is said that the first casualty of war is the truth. No it’s not; it’s journalism”. Thankfully the world now has a people’s free press publishing organization to help level the playing field of knowledge, but the US is not amused, nor do they play nice.

So, raise your voice in defense of WikiLeaks and Julian Assange for all kinds of reasons: the environment, Indigenous people, Corporate Media… the list goes on, but I’m speaking today as a peace activist. War is terror by state on a massive scale. The US use depleted uranium and cluster munitions, foul weapons that continue killing innocent people, long after a conflict is over. The Australian Government’s subservience to the US runs deeper than a Prime Minister, all dewy eyed over them. While claiming the moral high ground on cluster munitions, our Government did the United States’ bidding behind the scenes, to convince other countries not to sign. This unconscionable act was outed by WikiLeaks. WikiLeaks documents inform in bare facts the truth of modern war, giving lie to the pretense that we fight for humanitarian reasons. The fate of civilians in a war torn country is much grimmer than that of a combatant. In days of yore 90% of deaths in war were combatants, now 90% of deaths are non-combatants, one third of which are children. Has anyone heard that from our elected officials? How is that helping? Shouldn’t we know we are slaughtering women and children? 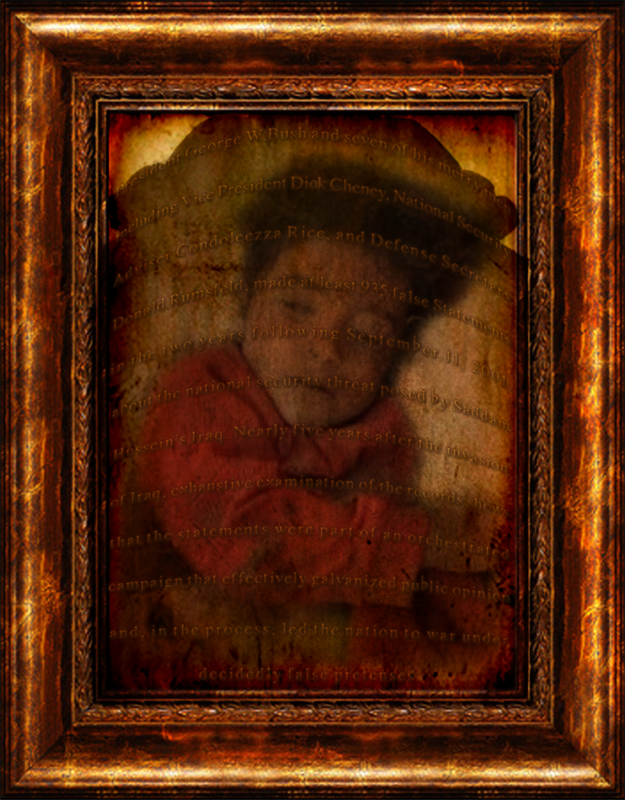 90% of war deaths are non-combatants, one third of which are children.

War these days is sold like any commodity, in sound bites and catchy platitudes, and we have been told so many times that we have turned a corner in Afghanistan. It’s obvious we’re going nowhere just trying to add to the US’s prestige. Our Government never tells us what we have learned from WikiLeaks. They are aware we would not tolerate the reality of the situation and like Lady Macbeth, we have blood on our hands.

Being privy to WikiLeaks documents on post 9/11 wars, for the first time in history, we are in a position to make informed decisions regarding our willingness to engage in aggressive imperialist wars, essentially killing civilians. Australia has wantonly participated in brutal, unnecessary conflicts not in the name of freedom and democracy, but US sycophancy. Successive governments can’t seem to say no to the US. Yes, we are allies and we expect to remain so, but this war is not in our national interest, and against the wishes of the Australian people. This is how a mature, sovereign nation would couch their refusal to murder poor people in their own country and steal their resources. Similar wording should be used to our ally regarding Julian Assange. It is becoming overtly apparent that our Government’s idea of the national interest is in conflict with our own.

Last week I spoke with the Afghan Peace Volunteers and they asked what can they do to help Julian Assange and WikiLeaks. I suggested they become a FOWL group and they agreed. For those that aren’t aware FoWL, it is friends of WikiLeaks. If these young people in a war torn country are willing to raise their voices because they know WikiLeaks and Julian Assange are good and true, surely their bravery can be copied here in a land where death does not stalk us on a daily basis. We need to rally, use social media, talk, write, telephone, visit our representatives, the media and anyone else who is willing to listen, in order to correct the untruths. The government has to be shown we are not going away and our numbers are growing. Tell our Government we demand to live in a free democracy, and as part of that democracy, free speech and freedom of the press is an axiom. Isn’t this the reason we were told that Iraq and Afghanistan were invaded? As is said: one man’s trash is another man’s treasure. Well, Julian Assange may well be considered trash to the US, but he is our national treasure. Demand your Government does its job and protects our fellow citizen, Editor-in-Chief of Wikileaks and award-winning journalist Julian Assange, from a brutal totalitarian regime and rogue State, the USA. 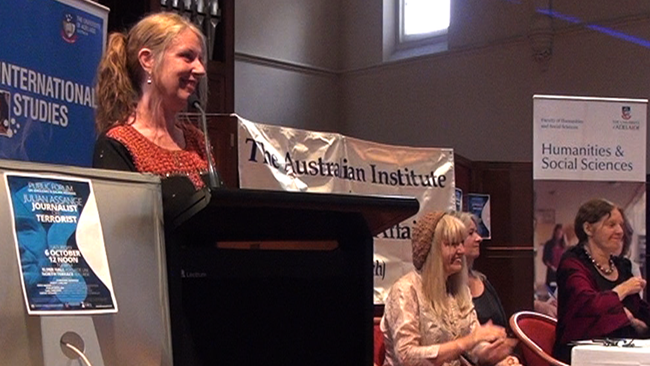 Statement from the Afghan Peace Volunteers in the 11th year of US/ NATO war:

Dear Wikifriends, Stop the War Coalition and other friends,

We thank you all for the work that you do for a more transparent, just and peaceful world! After 11 years of the U.S./NATO war in Afghanistan, and the three decades of war before that, we are very tired of the killings. This war cannot stop the war. This human method of war doesn’t work.

Afghans have a saying that “blood cannot wash away blood” and we’ve witnessed and experienced its truth, daily. The US has lost 2,000 of their soldiers. Afghans have lost at least 2 million loved ones over the past four decades of war.

Stop the killings. Stop the mutual bloodshed. Stop spending two billion US dollars a week just on killing. Stop the drones. Stop the use of depleted uranium. Stop.

Ordinary Afghans don’t need more weapons or more war. We need food, water, shelter and clothing. We need education, health care and decent livelihoods for all. We also need friends. We wish to remember the 2 million Afghan victims of war by finding 2 million friends for peace in Afghanistan.

The Afghan Peace Volunteers ask for a ceasefire from all warring groups. We want peace, the peace which is the colour, soul and jewel of life, without which we live bearing fears and worries, and without which life has little meaning.

In 2010, we the Afghan Peace Volunteers inscribed our beliefs and hopes on a plaque that sits at the entrance of Bamiyan Peace Park in the centre of Afghanistan:

“Why not love? Why not bring peace? Even a little of our love is stronger than the wars of the world.” 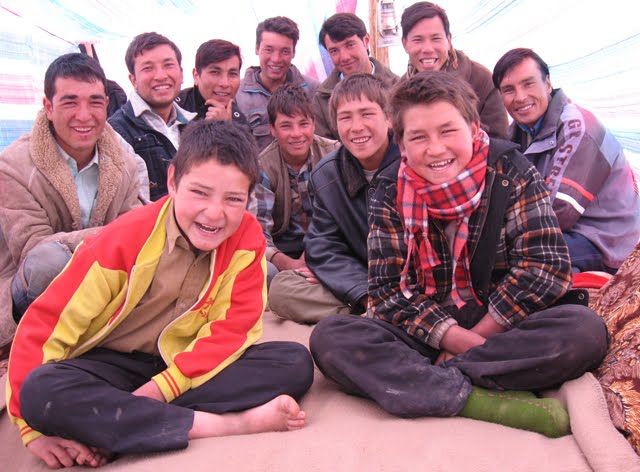 One Response to Gail Malone, Peace Activist: “Our taxes feed a war machine”