Julian Assange and the Doctrine of Diplomatic Protection

I’m going to talk today about some of the legal aspects of this intriguing case and in particular, pick up the notion that has been spoken about previously. The Australian Government has boasted – in fact as recently as 6 weeks ago, Foreign Minister Bob Carr has boasted that his Department has intervened on 62 occasions with assistance for Mr Assange, and that his Department has done more for him than for any other Australian over the same period of time.

The problem with consular assistance is that of its nature, it’s fairly limited and passive. It’s essentially an advocacy, and assistance service for Australians who find themselves in trouble overseas. So, I want to talk today about what lies beyond that particular form of assistance. Last year Natalie Klein, who is Dean of the School of Law at Macquarie University, wrote a very interesting article for the Melbourne University Law Review, on what she calls the Customary International Law Right of Diplomatic Protection, which certainly hasn’t been used in this case by the Australian Government.

Diplomatic Protection has a very fine lineage in the law and was defined by the International Court of Justice, in a case involving Belgium and Spain in 1970, as follows:

The State must be viewed as a sole judge to decide whether its protection is granted; to what extent it is granted; and when it will cease. It retains in this respect a discretionary power, the exercise of which may be determined by considerations of a political or other nature, unrelated to a particular case.

We should just unpack that for a moment. What the International Court of Justice was saying in the Belgium and Spain case in the 1970s, is that every State has a discretionary power available to it, through recognised Customary International Law, to intervene and protect one of its own citizens in a third country, and that the exercise of that discretion can be measured by political, economic and other considerations.

In the Australian context, the Doctrine of Diplomatic Protection was put very succinctly by Justice Finkelstein, who is now a retired Federal Court Judge, and of course the author of a report into the media, earlier this year. In a case called “Lay Kon Tji v Minister for Immigration”, a 1998 case in the Federal Court, he defined political protection in this way:

“There is protection given to a national by his or her state in relation to other states. This is usually referred to as Diplomatic Protection”.

He then cites a well-known author in this area, Dr Weiss, who describes Diplomatic Protection as a right of a State, accorded to it by Customary International Law, to intervene on behalf of its own Nationals, if their rights are violated by another State, in order to obtain redress. Justice Finkelstein then goes on to say:

“Thus, if a person has been injured in breach of International Law, the State of nationality of that person has standing to intervene on behalf of its National.”

That’s a very important point in the context of Mr Assange. The Australian Government could argue that Julian Assange, unlike David Hicks and Mamdouh Habib, has not been injured in the sense that they have been injured; having suffered, without a doubt, torture on the part of the Americans at Guantunamo Bay. However, the argument could well be, and I’ll put it to you later, that if there are reasonable grounds to suspect that a person will be subjected to torture, then the Australian Government should and can act to invoke the principles of Diplomatic Protection.

The answer to that question is a complex one, and its been dealt with by the United Kingdom Court of Appeal in a case called “Abassi v Secretary of State of Foreign and Commonwealth Affairs” in 2002. Abassi was a UK prisoner at Guantunamo Bay, and the court was led by Lord Phillips who is of course now the Chief Justice of the United Kingdom Supreme Court, which is the equivalent of the Australian High Court. So, it is a very influential judgement, and the Law Lords in that case set out the following principles about how the Doctrine of Diplomatic Protection might apply. The first thing they said, and I’ll put this in non-legal language, was that it’s not a defence by the Department of Foreign Affairs or the Government to say that the courts can’t review our power to invoke the Doctrine of Diplomatic Protection.

Because the real issue is, what’s the subject matter in a particular case? They then go on to say that despite the extensive citation of authority, Mr Abbassi’s counsel, there is nothing that supports the imposition of the enforceable duty to protect the citizen. The European Convention on Human Rights does not impose any such duty. Its incorporation into the municipal law cannot therefore found a sound basis on which to review the Government’s actions in the courts. What is being said here is that there is no enforceable duty on the part of the State, it is a duty that is purely discretionary. You cannot force a State to invoke the Doctrine Diplomatic Protection. There is no right that a citizen has. It is purely discretionary and its not part of the domestic law.

But he then goes onto say however, that the Foreign Office, – in the Assange case, the Department of Foreign Affairs and Trade – has the discretion to exercise the right, which it undoubtedly has, to protect British citizens. It has indicated in the ways explained what a British citizen may expect, although the expectations are limited and the discretion is a very wide one. But there is no reason why its decision or inaction should not be reviewable if it could be shown that the same were irrational or contrary to legitimate expectation. Yet the court cannot enter into forbidden areas, including decisions affecting foreign policy.

This is a very important principle, because what’s being said here is that if a government decides to, at the request of a citizen or those representing a citizen, it can invoke the Doctrine of Diplomatic Protection and therefore seek to protect a person against torture, or from some other form of cruel and unusual punishment. But if it decides to reject the request for Diplomatic Protection, that is a reviewable decision in the courts.

If it can be shown that the decision was, what we call in the law Wednesbury Unreasonableness (which is reference to a case) and so unreasonable that no reasonable decision maker could have made that decision, then the decision may well be overturned, or reviewed. Then there is the notion of legitimate expectation on the basis of procedural fairness. If there is no fairness in assessing the application, that is, the government received the application, didn’t seek further information, and didn’t provide an opportunity for the applicant to be heard, then again that decision may be reviewable and it could be overturned.

The Court of Appeal then in those last two principles sets out the extent of the obligation and when it might be exercised. And it is very similar to what the International Court of Justice said, and what Justice Finklestein said. The obligation to consider the position of a particular citizen, and consider the extent to which some action might be taken on his or her behalf, is something which is very much connected with a country’s foreign policy, and not something in which the courts will initially intervene.

I think that it is important in this particular case, as it was in some of the other cases that came before the British and Australian Courts, to recognise the limitation that the courts have imposed. You have the Executive and the Parliament; then you have the Courts. The Courts have always shied away from interfering in matters of policy; particularly foreign policy, seeing them as being the prerogative of Parliament and of the Executive.

Finally, the point must be this. It’s not everyday that an Australian citizen faces the prospect of torture and cruel and unusual punishment overseas. But we saw the same inaction from the Australian Government with the David Hicks case for many year; we saw it with Mamdouh Habib; and we see it in Bali everyday for the Bali nine. In Mr. Assange’s case we have on record as recently as two weeks ago, in the Fairfax newspapers, claims that the Americans see him as an “Enemy of the State” and that he would therefore be subjected to the privations which come with being a maximum security prisoner. He would be placed in isolation; he would be subjected to interrogation techniques – all of which would amount to cruel and unusual punishment and or torture. Given that’s the case – and so obviously the case – why is it that the Australian Government has not invoked the Doctrine of Diplomatic Protection, as it should do on behalf of its citizen?

It is extraordinary, I think, that the Doctrine of Diplomatic Protection has not been a source of greater focus in this particular case. I don’t say that with any sense of criticism of Julian’s excellent legal team. They may have made a request, but it is certainly something to consider. It is certainly something to ask of the Australian Government: to exercise its rights under Customary International Law. And if it has done so, on what basis has this been asked, and if rejected, on what basis has it been rejected? The rejection, as I say, may be a reviewable decision.

As we saw in the case of Mr. Habib, the use of the courts can be significant; in his case where the issues about Diplomatic Protection were in fact agitated before the Federal Court and the full Court of the Federal Court, the Commonwealth settled the case. It is interesting that they didn’t want it to go to trial. He had claims about whether or not Australian security agencies knew or participated in torture of him in Egypt, and the case was settled. But one of the live issues there was what the Australian Government was doing; whether or not Australian government officials, knowing he was being tortured, should have invoked the Doctrine of Diplomatic Protection. And if they didn’t do that, whether they can hide behind a legal shield to protect themselves.

So, that’s a synopsis of a very interesting angle in this particular case. One which hasn’t got a great deal of press to date, but which I think is certainly worth exploring. Scott Ludlam and his team, who have done a very good job on this case, might want to add it to their list of questions. 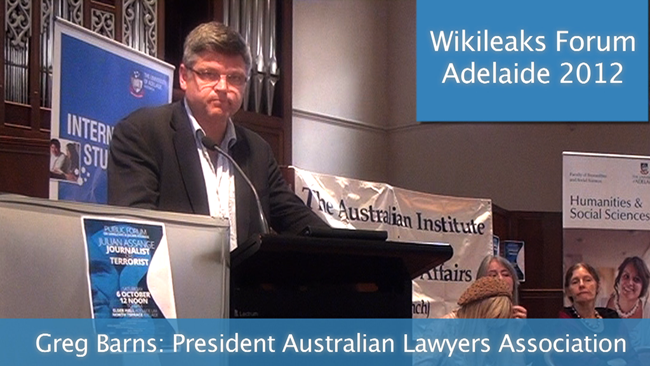 3 Responses to Julian Assange and the Doctrine of Diplomatic Protection