ENOUGH IS ENOUGH! was the tone of the message delivered to Sydney’s Department of Foreign Affairs and Trade this Christmas by 12 representatives of the Support Assange and Wikileaks Coalition [SAWC]. Two years, they say, is way too long for Julian Assange to be subjected to jail, house arrest, and despite diplomatic asylum having been granted, further confinement inside the Ecuadorian Embassy for over 6 months.

SAWC’s mission was to deliver DFAT’s own documents, obtained through FOI requests; and stage a sit-in until DFAT guaranteed effective action to secure Assange’s life and freedom. They added a large collection of “Facts for Bob” regarding US involvement in the case, and a TIMELINE, also assembled from material that DFAT is already aware of.

It wasn’t exactly a warm reception. 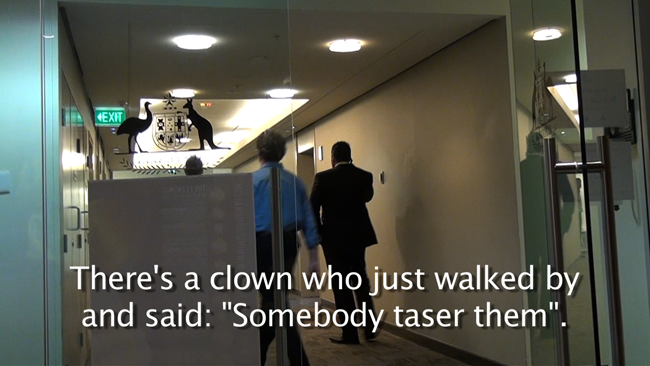 Although the situation is complex, internationally dispersed, and according to the government of Ecuador, clearly political, it is immediately gridlocked by the silence of Swedish Prosecutor Marianne Ny, who wants to question Assange in relation to tenuous allegations of a sexual nature, but will not do so in any way that avoids the risk of him being forwarded on to the US.

Assange, as we all know by now, has not been charged with any crime in any country, but if delivered to the US, he could be facing indefinite detention without charge, according to the terms of Obama’s 2012 National Defence Authorisation Act [NDAA]; and possible torture, akin to that inflicted upon the alleged Wikileaks source, Private Bradley Manning.

How could that happen to an Australian journalist who didn’t even publish his material in the US, one might ask… Not a problem. The NDAA can apply internationally; and since 2011, the Gillard government has established a number of amenable terms within a US-Australia Alliance. 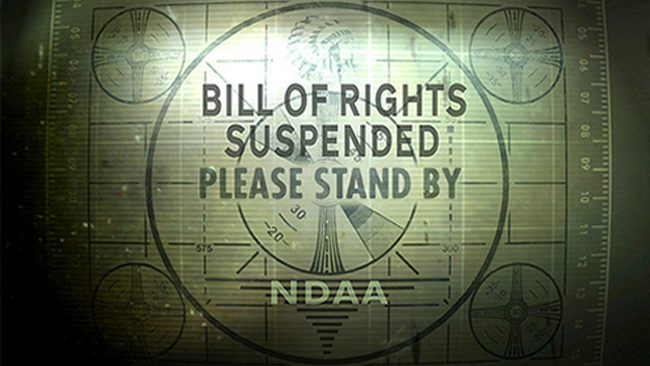 If Assange frees himself from the Embassy gridlock and returns to Australia, but, the US decides to prosecute… Prime Minister Gillard’s 2012 Extradition and Mutual Assistance in Criminal Matters Legislation Amendment Act has made it easier for the US to extradite him from Australia. The charge in that case would most likely be “conspiracy to commit espionage”. This is punishable by life imprisonment, or – if many prominent US politicians have their way, and Assange’s previously rumoured destination is in fact Texas – the death penalty.

All this, because of the Wikileaks Cablegate publications, or as US courts would attempt to demonstrate, how they came about. Although much more grave, Cablegate is also a tenuous case, since journalists are protected by the 1st Amendment of the US Constitution; and other organisations such as the New York Times, the Washington Post and the Guardian have published the same material.

But does it really matter, if indefinite detention without charge is currently an option? No surprise that one of our greatest champions of democracy through transparency, Daniel Ellsberg, is fighting so hard against the NDAA. Like the gridlock in the Ecuadorian Embassy, subject to the prerogative of a Prosecutor, rather than the facts of a case, it acts as no more than a “pause button” that temporarily, if not indefinitely erodes the Rule of Law.

There are many more examples of such “Because I can”, non-justice in our world today; instigated by figures of authority for as long as they can get away with it, or as long as it takes to profit. And then there’s the rest of us, who try to juggle with “Because I can’t” in as legal a way as possible. 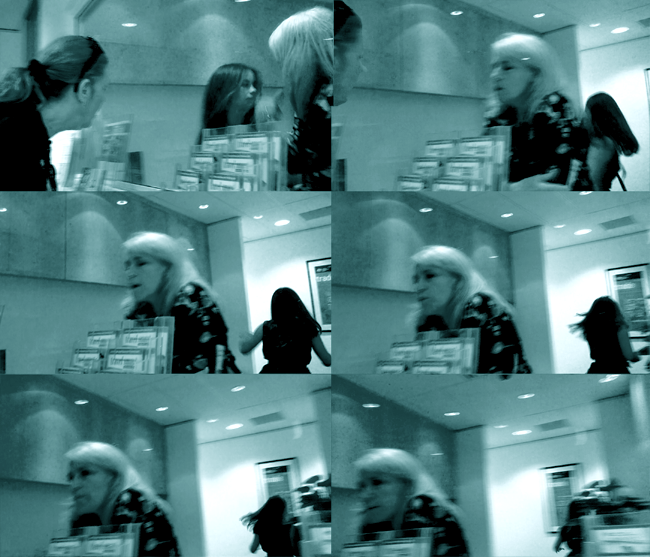 A DFAT staff member runs off to call Security when Assange supporters arrive at the counter.

Concretely, the case for the Swedish prosecution is tenuous because no one’s chromosomal DNA was found on the condom submitted as ‘evidence’ by Anna Ardin. That’s grounds for dropping the case. The other woman, Sofia Wilen, refused to sign her statement when she discovered what Ardin and her policewoman friend, Irmeli Krans, were cooking up for Assange. That, and the fact that Ardin was present during the entirety of Wilen’s interview, are grounds for its failure to launch.

But even though exculpatory forensic evidence has been available for well over two years, the British appeal process has excluded the details of the case as irrelevant, and Assange’s defence has had to focus only on the legality of the European Arrest Warrant paperwork.

Australian Diplomats continue to play dumb, and say Julian should “Just go to Sweden”; while claiming no knowledge of a US Grand Jury; cables they received describing an investigation “unprecedented in scale and nature”; and a sealed indictment that awaits only his placement in custody – anywhere – to be opened.

Observing the petit bureaucrats in the hallways of DFAT – one asking for us to be tasered – I begin to wonder. “Conspiracy of myopia” is surely an oxymoron, but is that it? 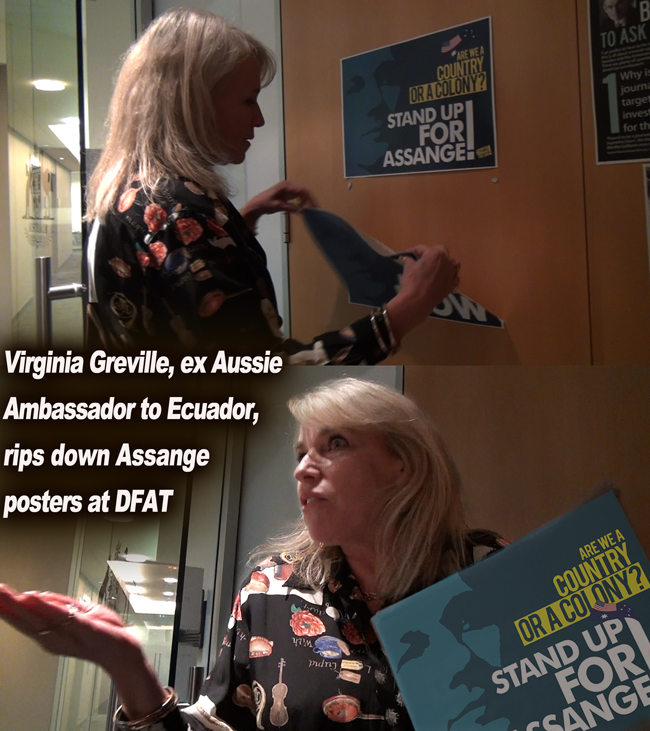 As long as the Swedish Prosecutor refuses to compromise, the Swedish case can not be resolved; Assange can not go to Ecuador or Australia (where he is also wanted by the Australian people, but as a Senator); and Britain’s obligations to extradite stand.

That of course means that Assange will be arrested by British police and taken to Sweden if he leaves the building, even to seek medical aid in relation to a chronic lung infection. Jesus wept. Once in Sweden, he would be immediately imprisoned, and resistance to Sweden’s Temporary Surrender Treaty with the US would no longer be possible, even for the government of Ecuador, his only protectors.

So who is Australia helping? Ecuador would say they are helping those who continue to persecute and have been visibly – to everyone but the wilfully myopic – preparing to prosecute Julian Assange. It is understandable, because Australia has always been subjected to its master’s voice. Australia has always been one season behind, and subdued by its sense of isolation. But communication, transparency and people power is an unstoppable tide, and the quiet of the Ecuadorian Embassy is but the eye of that storm. Lies are short-circuited within an instant and the “pause button” does not hold for long.

We learn quickly how the world works. We challenge boldly the statements and intentions of those who seek to control us behind a facade of democracy and monarchy.

We unite lovingly in common purpose and common principle to design, build, document, finance and defend.

We learn and we teach each other. Together, we challenge. We act.

8 Responses to Christmas at DFAT