The Assange Affair, April 2013 – a public lecture by Justice Stefan Lindskog of the Supreme Court of Sweden, is streaming on the University of Adelaide website. Viewers are advised that the term “Affair” has largely been interpreted in the sexual sense. 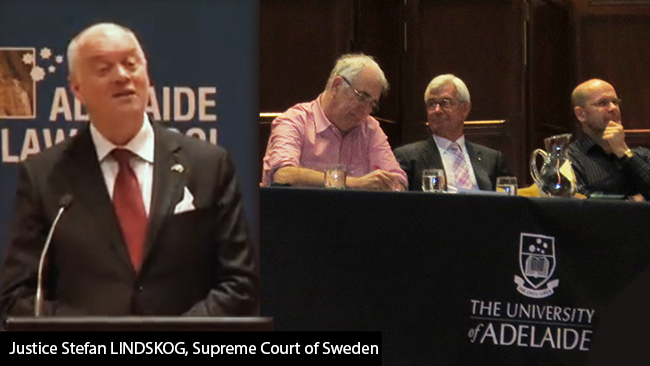 The sponsors decided not to live-stream the other panel members, Julian Burnside QC, Jack Waterford of the Canberra Times and Professor George Williams AO, all of whom brought a significant contribution to this debate. Of equal interest is the Q & A with the audience, wherein Justice Lindskog was faced with some challenging questions.

He conceded that the robust Swedish judicial system he just promoted was powerless; not even consulted… when two Egyptian nationals, Ahmed Agiza and Muhammad al-Zery, were illegally rendered to Egypt and tortured. Sweden’s Ambassador to Australia Mr. Sven-Olof Petersson admits that he however, had advance knowledge of the CIA rendition flight from Stockholm on December 18, 2001.

“I would like to comment upon the possibility of the prosecutor to go to London. It is possible that the prosecutor could travel to London and interrogate him there. I have no answer to the question why that hasn’t happened.”

Doesn’t this undermine one of the central claims of the Swedish government and remove the need for extradition? And wouldn’t it also make the UK wonder why they had wasted 3 million pounds on keeping an eye on Julian? Britain might now consider sending the bill to the Swedish prosecutor’s office, since without their unjustified refusal to do what is legal and normal in such situations, the British could surely put their money to better use.

Audio only is available at this stage for the other speakers, but will be replaced by video in the near future.