More than 400 people crowded into a lecture theatre at the University of Technology on February 17 to attend a public forum, “Don’t shoot the messenger: WikiLeaks, Assange and Democracy”. It was organised by the newly formed Support Assange and WikiLeaks Coalition, with the support of the Australian Centre for Independent Journalism, T2T and the Stop the War Coalition, Sydney 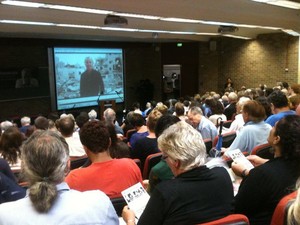 Veteran journalist and former SBS broadcaster Mary Kostakidis chaired the meeting. She told the audience WikiLeaks had won several prestigious awards for excellence in journalism. She said the US government is persecuting WikiLeaks for publishing material that other media outlets have also published. The difference was that WikiLeaks has done it better, she said.

WIKILEAKS, ASSANGE & DEMOCRACY with Humphrey McQueen from CaTV on Vimeo.

“… all of human history the 1% have struggled to make sure that the 99% couldn’t read or write at all, let alone read what WikiLeaks has revealed.

The Church used Latin. The Russian Tsarists used French against their own population. When John Wycliffe tried to translate the Bible into English he managed to die before they got to him, but they dug his bones up and burnt them anyway. They were probably pretty convinced that he was in hell, but they thought they’d do the little bit extra that they could.

Slaves in America were flogged if they tried to learn to read. But the important thing is that the slaves resisted. They used what was available to them — which was the Old Testament — to write hymns of protest.

But it wasn’t only the Holy Inquisition that tried to stop people knowing what was going on in their world.

No less than the president of the Royal Society, the chief scientist in England, announced in the 18th century: “Giving education to the labouring classes of the poor will be prejudicial to their morals and happiness. It would teach them to despise their lot in life, instead of making them good servants in agriculture and other laborious employments to which their rank in society has destined them.

“Instead of teaching them subordination, it would enable them to read seditious pamphlets and render them insolent to their superiors.” This is the voice of science speaking, not the inquisition.”

WIKILEAKS, ASSANGE & DEMOCRACY – with Scott Ludlam from CaTV on Vimeo.

“We hauled this poor fellow from Mastercard in to Parliament House the other day and asked him what the hell they were doing with this financial blockade on a publisher, more than a year after this blockade came down. That was a really interesting conversation; I can’t disclose what he said… [laughter] So why don’t YOU ask him?”

“I wanted to start this evening with a Jewish curse that someone told me recently: “May you be involved in a lawsuit in which you know you are right.” [laughter]

No one knows the meaning of this curse any better than Julian Assange and his colleagues at WikiLeaks. Assange has been accused of many, many things. Everything from being anti-Semitic to being a Mossad agent – ” how you could be the two at the same time I don’t know.

Our own prime minister [Julia Gillard] has accused him of illegal conduct, prematurely, prejudicially and prior to announcing a full-scale criminal investigation, which of course resulted in the outcome that the Australian Federal Police disagreed with her.

US government propaganda, shamefully echoed by our own prime minister, accused WikiLeaks of publishing in breach of US law. But they are wrong.

“Here are the facts:

Both women involved in this “sex scandal” never alleged rape, but insisted that the sex was consensual and not violent.

Woman SW has actually complained about being railroaded and was so upset that Julian was charged with rape that she refused to sign her statement.

Woman AA, who took a condom to the police saying that Julian had deliberately torn a condom during sex – forensic examination proved there was not DNA from either her or Julian in it.”

All the Facts – by Christine Assange
wlcentral.org/node/2486